The E. M. Carreira research group from the ETH Zürich (Swiss) recently published in Angewandte Chemie a total synthesis of a harziane diterpenoid. This diterpenoid 1 (see Figure 1) was firstly isolated by the J. Ouazzani and co-workers in 2014, however, the now published total synthesis revealed that the proposed structure from Ouzzani et al. has to be revised. In the same month, Sheng-Hong Li from Kunming (China) described a structure that is identical to the now revised structure of originally reported 1 and named the terpenoid harzianol I. Unfortunately analytical data is not comparable because of different deuterated solvents used.

For the racemic synthesis, the Carreira group decided to synthesize 1 from 2 through late-stage adjustments of the oxidation pattern. Using an innovative strategy both seven-membered rings are build up by aldol reactions. Tricyclus 3 was synthesized from 4 by gold-catalyzed cycloisomerization, which itself is available from 5.

Starting with known ester 6 addition of bromobutyne led to racemic 5 in 97% yield as shown in Scheme 1. The following [Pd] catalyzed cycloisomerization set the desired five-membered ring system in 79% yield and subsequent transformation into protected ketone led to 7 in very good yield. Both alkenes were hydroborated under oxidative conditions leading to a >4:1 diastereomeric mixture of the diol. Primary diol was protected as pivalate and secondary alcohol was then oxidized to the ketone 8 in 76% yield. The ketone was then transformed into the cyclopropyl 9 with Petasis' reagent directly followed by reductive cleavage of the pivalate in moderate yield. Then oxidation to the aldehyde basic conditions led to a full epimerization before terminal alkyne was established using Ohira-Bestmann reagent to get key fragment 4. 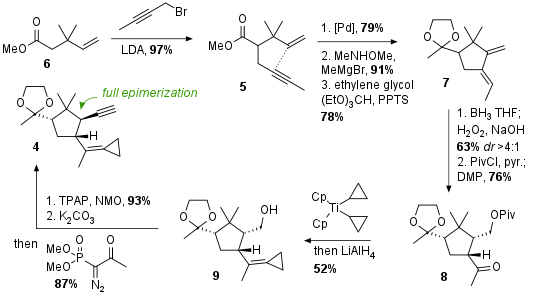 Using a Gold catalyzed cycloisomerization led to the intermediate 10 which is then transformed into 11. As shown in Scheme 2 the quarternary carbon was build up with a high diastereomeric ratio. The authors noted that this transformation is only described once in literature with a more simplified structure. With 11 in hand, regioselective hydroboration and subsequent oxidation led to unsaturated ketone 12. The second quarternary center was then introduced using Nagata's reagent followed by the enolization of the ketone and subsequent [Pd] catalyzed Negishi coupling to trisubstituted 13. Finally, 13 was transferred into the ketone followed by enolization and trapping as TBS enol ether 3 in 81% respective 80% yield.

Nitrile 3 was then reduced to aldimine 14 which, after an extensive screening of conditions, cyclized to 15 in 71% yield as shown in Scheme 3. The authors noted the high stability of aldimine 14 which could be isolated. Diastereoselective introduction of the methyl group in 1,4 position was followed by oxidative ring-opening to 16 for the purpose of ring expansion. Therefore ring-closing by aldol addition led to the desired seven-membered ring and after Wittig reaction fragment 2 was synthesized in 79% yield over 2 steps. The ketone 2 was reduced and deoxygenation using Barton McCombie's protocol led to 17 in again very good yields.

Scheme 3: Ring-closing and expansion to construct the final ring system.

Completion of the Total Synthesis

Because of the uncertainty of the correct stereocenter of the tertiary alcohol both the nominal structure and the epimere were synthesized. As shown in Scheme 4 the nominal structure could be synthesized by the oxidative transformation of 17 into ketone 18 followed by diastereoselective methylation. The authors then concluded from the obtained analytical data that the structure has to be revised. This was also proven by the synthesis of the revised structure 1 by hydration of 17 in 83% yield. 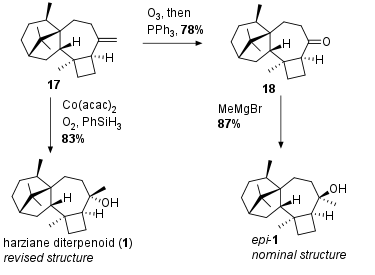 Scheme 4: Completion of the total synthesis and the revision of the structure of harziane diterpenoid 1.

In conclusion, the Carreira research group successfully described the total synthesis of 1 by an innovative strategy, including a gold-catalyzed cycloisomerization and two highly challenging aldol transformations.