In their publication in Science (T. Gaich et al. Science, 2020, 367, 676) the research group of Tanja Gaich from the University of Konstanz reported the first total synthesis of canataxpropellane (1). The diterpenoid was firstly isolated in 2007 from needles of Canadian yew (Taxus Canadensis). The natural product is, together with the for cancer therapy important taxol, member of the taxane family, although the structure of 1 is more complex due to three additional C-C bonds  which leads to a heptacyclic [5,5,5,4,6,6,6] carbon framework.

In their synthesis of the taxane, the group first aimed key intermediate 2 which should already  possess the final core structure together with most of the functional groups. Albeit 2 is easily available from 3, the derivatization of 2 to the final natural product requires 24 steps. On the other side, the cycloaddition to 2 is everything else than trivial. During the closing of the cyclobutane ring-system, four new stereocenters are set. Substance 3 itself can be synthesized by Diels Alder reaction from 4 and 5. 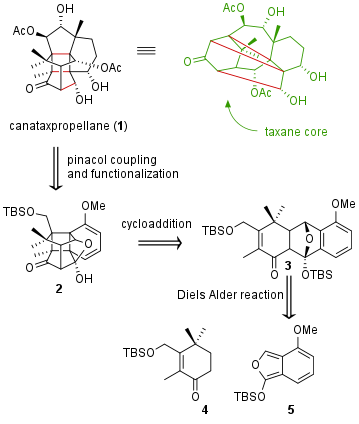 In the beginning, the authors decided to start with a racemic synthesis. For the first cyclization of 4 (prepared in three steps) and 5 via a Diels Alder reaction 6, which can be synthesized in three steps, is deprotonated and the enol is trapped as a silyl enol ether. In this highly endo selective reaction dienophile 4 reacted with in situ prepared 5 to give 3 in 71% yield. Irradiation of 3 then enables cyclobutane formation by [2+2] cycloaddition which led to the desired [4.4.2]-propellane 2 after three cycles. Note that 2 was synthesized decagrams with a minimum amount of steps. After an unsuccessful lactol opening of 2, the authors decided to proceed by retro aldol reaction to 7. This unusual transformation was initiated by TBAF without touching the primary TBS protected alcohol. The following selective reduction led to a spontaneous translactonization. The free alcohol was then protected as MOM ether to get 8 in 70% yield from 2. 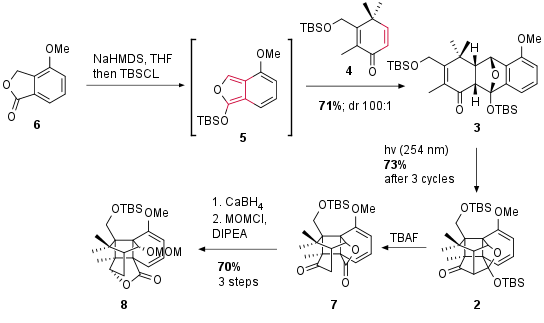 Scheme 1: Synthesis of compound 8 by Diels Alder and [2+2] cycloaddition.

Then 8 was reduced to the diol followed by Swern Oxidation to dicarbonyl 9. Intramolecular aldol reaction led finally to 10 in 53% yield over 3 steps. Note that 10 represents the opened 2 which couldn't get transformed directly. The following photooxygenation delivered 11 as a single stereoisomer. Unusual opening with BHT led to 12  after several more common procedures failed. The newly generated alcohol was then oxidized and directly reduced to inverse the stereocenter. The selectivity of reduction 13 is determined by the neighbouring hydroxyl group in medium selectivity and yield (51%, dr 3:5:1).

With diol 13 in hand still some functionalization before pinacol coupling was necessary. Therefore diol 13 was protected as acetal and 1,4 reduction led to ketone 14 in 95% yield over 2 steps. Enolization with KHMDS led to the vinyltriflate after treatment with Comins' reagent. Palladium catalyzed carboxymethylation yielded in unsaturated ester 15 with 77% yield over 2 steps. The unsaturated system was reduced with metallic magnesium, which was followed by alpha methylation to 16. After reduction to the alcohol, TBS ether was cleaved with TBAF. The diol 17 was then oxidized to the dicarbonyl as the precursor for pinacol coupling. This pinacol coupling was accomplished with TiCl4 and Zn dust and led to 18 as a single isomer. Both free hydroxy groups were protected transformed into their acetate and subsequent deprotection of the MOM group led to a mixture of 19 and 20 due to undesired acetal opening. 19 was therefore again transformed into the acetal. Finally, monodeprotection of acetal followed by acetalization at another hydroxyl group with moderate regioselectivity (2.5:1) was followed by reductive cleavage of benzylidene acetal to finally deliver the canataxpropellane (1). 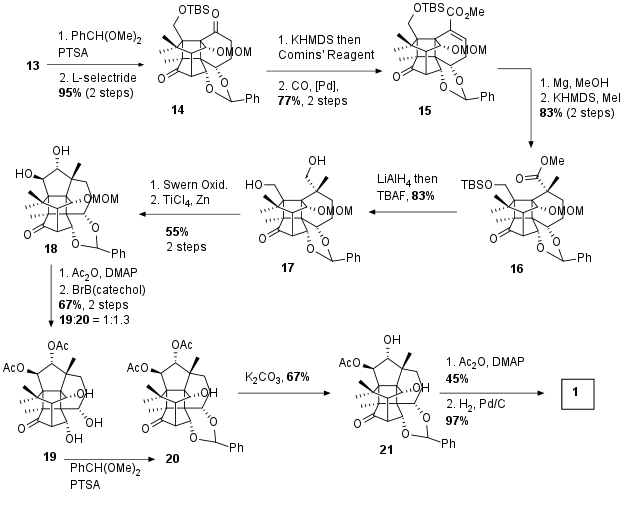 For a total synthesis of canataxpropellane in an enantioselective fashion, Diels Alder reaction to 3 has to be enantioselective. Unfortunately, common methods with e.g. chiral Lewis acids failed due to decomposition of the starting material. In the end, the usage of chiral silyl protecting group could induce a moderate diastereoselecitivity. The desired major isomer of 24 (which is separable by column chromatography from its isomer) could then be transformed into canataxpropellane in 25 steps also confirming the absolute configuration of the natural product. 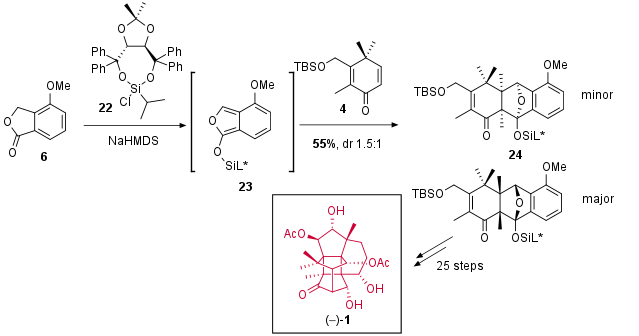 Finally, the research group from Tanja Gaich could successfully implement a synthetic route to the rare natural product. Their synthesis was accomplished in 26 steps from commercially available material with a total yield of 0.5%.