In 2002 Sheu et al. isolated scabrolide A (1) and other natural products from Taiwanese soft coral (Sinularia scabra). Now the research group of Brian Stoltz from Caltech University (USA) reported the first total synthesis of this complex norditerpenoid in the Journal of American Chemical Society, which was prepublished at ChemRxiv. Scabrolide A (1) featuring a [5-6-7] framework with a additional lactone moiety. 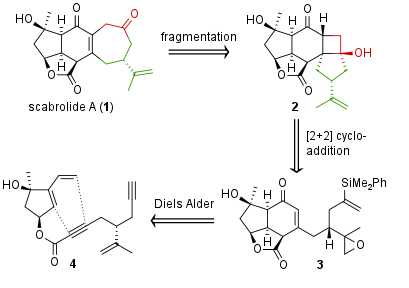 From a retrosynthetic viewpoint (see Figure 1) the Stoltz group decided to build up the seven membered ring by oxidative fragmentation of a [3.2.0] biycylcus. The precursor 2 was synthesized by [2+2] cycloaddition and fragment 3 itself is derived from 4 by Diels Alder cyclization.

Precursor 4 was synthesized by Steglich esterification of the two fragments 8 and 11 in 79% yield. Alcohol 8 was prepared from literature known compound 5 (which itself is derived from (R)-linalool). Michael addition delivered ketone 6 in 64% yield and good dr and further enolization followed by oxidation led to compound 7. Luche reduction was followed by TBAF deprotection of the silylether to get diol 8 in 78% yield over 2 steps. The acid compound 11 was synthesized from aldehyde 9, a literature known (R)-carvone derivative. First a terminal alkyne was installed by Corey Fuchs reaction and directly TMS protected followed by acidic deprotection of the southern aldehyde to get compound 10. This time the intermediate from the Corey Fuchs reaction was quenched with CO2, which resulted in free acid 11 after deprotection of the other acetylene. 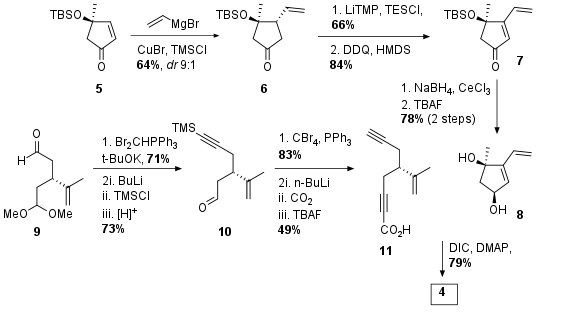 With key fragment 4 in hand Diels Alder cyclization under thermal conditions delivered tricyclus 12 as single diastereomer in 75% yield as shown in Scheme 2. Now a ketone was introduced by directed epoxidation of the double bond to 13 (94% yield), followed by Lewis acidic epoxide opening (86%) and IBX oxidation to 14 accompanied by olefin migration. Their initial plan to use a derivative of 14 for [2+2] cycloaddition failed due poor regioselectivity because of the terminal alkene of 14. Consequently protection of terminal alkene by epoxidation delivered fragment 15 in 87% yield. Finally Ru catalyzed selective hydrosilylation led to the cycloaddition precursor 3 in 85% yield. 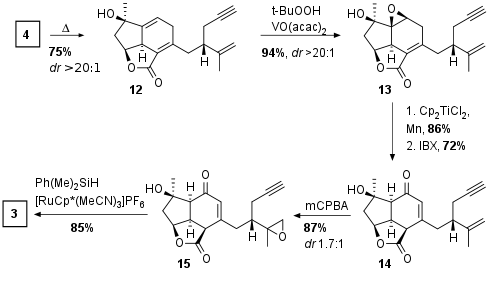 With protected alkene 3 [2+2] cycloaddition followed by Lewis acidic epoxide ring opening led to highly complex compound 16 as shown in Scheme 3. The silylgroup was then oxidized in 55% yield to the tertiary alcohol by Tamao–Fleming oxidation. The following Grieco dehydration delivered fragment 2 in 79% yield. Finally oxidative fragmentation delivered scabrolide A (1) in 61% yield. The authors describe the intermediate 17 where elimination led to the unsaturated ketone. 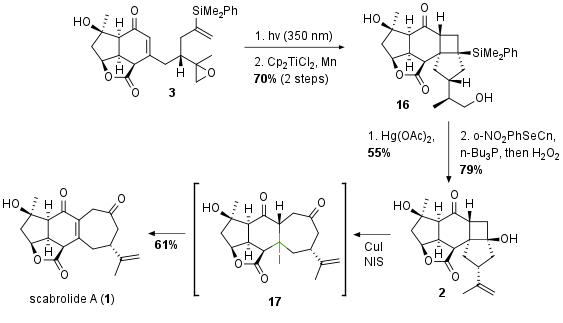 Scheme 3: Finalization of the total synthesis of scabrolide A (1) by [2+2] cycloaddition and oxidative fragmentation.

Finally, the Stoltz group were able to synthesize this complex natural product in 16 steps from literature known compounds or 21 steps from (R)-carvone as longest linear sequence. This total synthesis features the assembling of the core structure by Diels Alder cyclization, [2+2] cycloaddition and late-stage oxidative fragmentation.