The total synthesis of cortistatin A (1, see Scheme 1) by the K. C. Nicolaou research group published 2009 in Angewandte Chemie  futures a cascade reaction to build up the core structure of the alkaloid. From a retrosynthetic point of view 1 should be available from 2 by late-stage functionalization. Polycycle 2 itself should be synthesized from 3 by oxa-Michael addition which then triggers an aldol condensation to the unsaturated ketone 2. Finally, 3 can be generated by Sonogashira coupling from 4 and 5. 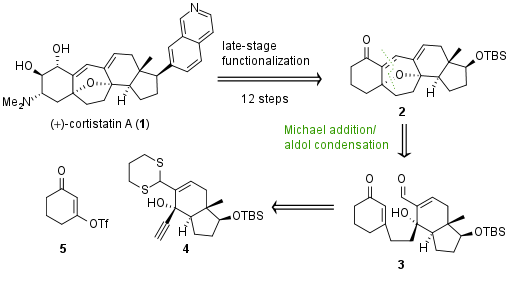 Figure 1: Retrosynthetic analysis for the total synthesis of cortistatin A (1).

Synthesis of Fragment 3 and Cascade Reaction

The Nicolaou research group decided to start their synthesis with Hajos-Wiechert ketone 6 which was transformed into 7 in  literature known five-step procedure as shown in Scheme 1. Then diastereoselective dihydroxylation  of the alkene was followed by acetonide formation to 8 in both good yields. Enolization of the ketone was followed by triflation and methoxy carbonylation to ester 9. The ester moiety was transferred into the aldehyde and protected as thioacetate. During the formation of the thioacetate, the acetonide was cleaved which resulted in the formation of 10 in 70% yield. Then primary alcohol was oxidized which allowed the formation of the alkyne using in situ generated Ohira-Bestmann reagent to liberate fragment 4 in 14 steps from 6. 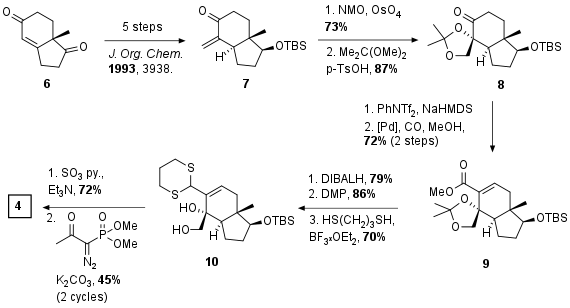 As summarized in Scheme 2 Sonogashira coupling of 4 with enol triflate 5 delivered coupling product 11 in 85% yield. Treatment with IBX led to deprotection of the aldehyde in 81% yield, which was followed by the complete reduction of the alkyne to cascade precursor 3. Treatment of 3 with K2CO3 in refluxing dioxane led to the key fragment 2 in 52% yield. The authors propose an oxa-Michael addition to enolate 12 which then reacts to the aldol condensation product 2. 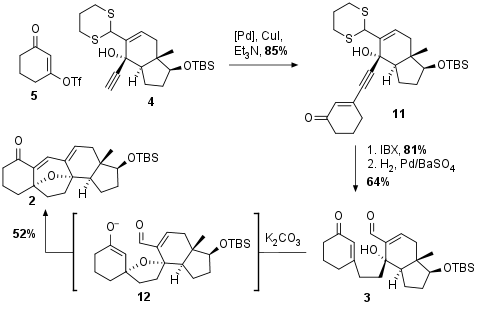 Scheme 2: Synthesis of 3 and key reaction to core structure 2.

With key fragment 2 in hand, the Nicolaou group could successfully complete the total synthesis of cortistatin A (1) as shown in Scheme 3. Therefore ketone protection, TBS deprotection, and oxidation led to substrate 13. Again, the formation of the enol triflate was followed by Palladium-catalyzed coupling this time with a boronic ester in a Suzuki coupling to get isoquinoline 14. Acidic deprotection of the ketone was followed by diastereoselective reduction of the freshly installed alkene. Then the ketone was transformed into the unsaturated ketone by treatment of the silyl enol ether with IBX MPO to synthesize 15 in 4 steps from 14. Late-stage epoxidation successfully delivered only one isomere, however, the following reduction of the ketone gave a 1:1 diastereomeric mixture. Fortunately, both isomers could be separated and the desired isomer was finally transformed into cortistatin A (1) by Lewis acidic promoted epoxide opening. The undesired isomer could be epimerized by oxidation and subsequent reduction. 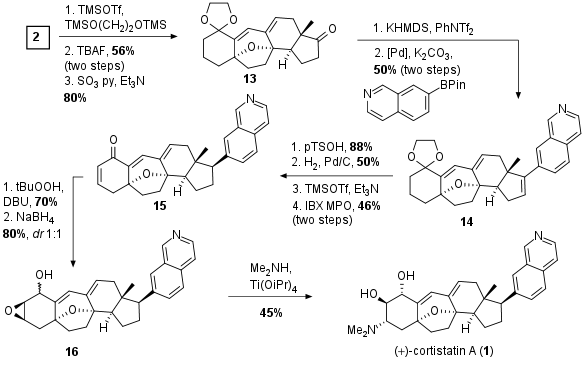 Scheme 3: Completion of the total synthesis of cortistatin A (1) by Nicolaou et al.

In summary, the Nicolaou research group successfully described a total synthesis of cortistatin A in 30 steps from the Hajos-Wiechert ketone 6 respective in 25 steps from literature known compound 7. In their key step oxa-Michael addition/aldol reaction/ dehydration cascade led to the core structure of cortistatin A.