In one of the early total syntheses of cortistatin A (1, see Figure 1) the research group of Matthew Shair from Harvard University (USA) successfully described the usage of an aza Prins cyclization to form the core structure of the alkaloid in the journal JACS in 2008. The precursor 2 for this late stage transannular cyclization should be available from 3 by ring expansion, which itself is synthesized from the Hajos-Parris ketone (4).

Figure 1: Retrosynthetic analysis for the total synthesis of cortistatin A (1).

As shown in Scheme 1, the Hajos-Parrish ketone (4) was transformed into TBS ether 5 in a literature-known procedure by regioselective reduction and TBS protection. Deprotonation in γ position to the ketone allowed the introduction of the alkane side chain in 63% yield. The ketone was then again enolized and protected as TBS enol ether 6. Selective reduction of the trisubstituted double-bond by H2 was followed by epoxide formation of at the enol ether. Subsequent deprotection gave the α hydroxy ketone 7. The Shair group then protected the free alcohol as MEM ether in 88% yield under standard conditions. Then deprotection of the ketone gave the dicarbonyl which underwent cyclization triggered by the formation of the terminal enolate to achieve the desired tricyclic system in 49% yield. Elimination to the β,γ unsaturated ketone was achieved with thionyl chloride. Finally, enolization and vinyl triflate formation were followed by cross-coupling with the shown disiloxane to afford fragment 3. 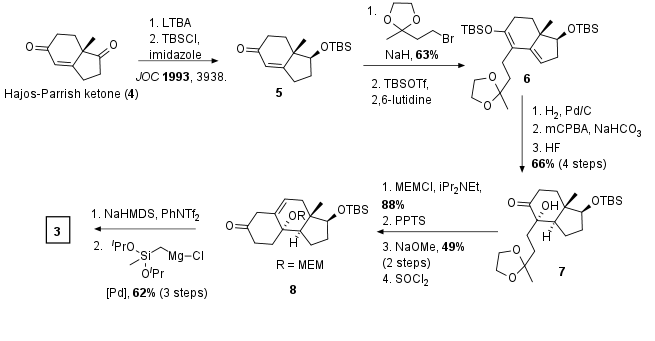 Scheme 1: Synthesis of fragment 3 from the Hajos-Parris ketone (4).

With fragment 3 in hand, the ring expansion strategy was explored. As shown in Scheme 2, cyclopropane formation to 9 was directly followed by treatment with TASF to achieve the desired silicate-directed elimination to 10. The authors also described the unsuccessful usage of other silyl groups like TMS which only led to a triene system (not shown). Now Suzuki cross-coupling allowed the introduction of a disubstituted alkene, which underwent diastereoselective dihydroxylation to the diol. Finally, acetate protection of the diol gave 11 in 51% yield over two steps.

For the finalization of the total synthesis, the Shair group transformed silyl ether 11 into the aldehyde 2 by deprotection and DMP oxidation. The cyclization precursor was then treated with Me2NH to form in situ the corresponding imine. This triggered the attack of the protected alcohol at the double-bond which itself then attacked the imine under Lewis acidic conditions which released core structure 12 in 65% over three steps. As shown in Scheme 3 final adjustments were necessary to achieve the natural product. Deprotection of TBS ether was followed by oxidation to the ketone and deprotection of the diol moiety to liberate 13, which was already used in the synthesis of 1 by the Baran group. In a similar sequence, 13 was transferred into iodine 14 which allows the cross-coupling with the desired isoquinoline moiety. The challenging reduction step was conducted by in situ formation of diimide to achieve cortistatin A (1) in 20% yield.

Scheme 3: Completion of the total synthesis of cortistatin A (1) by the Shair group.

Using a challenging aza Prins late-stage transannular cyclization, the Shair group could successfully report an enantiomeric synthesis of cortistatin A (1). Starting from the Hajos Parrish ketone (4) they were able to construct the alkaloid in 27 steps using a ring expansion strategy to introduce the seven-membered central ring.