In this publication from Tao Ye  (叶涛) et al. from Peking University Shenzhen Graduate School (based in Shenzhen) the authors describing the total synthesis of dysoxylactam A (1), a polyketide with its six stereocenters. Retrosynthetic analysis shows that the polyketide was cyclized by metathesis and the metathesis precursor was synthesized by Krische allylation as shown in Figure 1. Fragment 2 was build up by classical retrosynthetic cuts on the amide and ester. The southern fragment, containing most if the stereoinformation, was available from Roche ester.

At the beginning Roche ester 3 was protected and reduced to 4 in a literature known sequence (see Scheme 1). Then 4 was regioselectivly lithiated at the carbamate followed by trapping with pinacolborane to 5. The following homologation process follows a recently developed procedure by V. Aggarwal et al. leading to boronic ester 8 in excellent yield and diastereoselectivity. Note the chiral influence of (+)-sparteine through lithiation of 6 to 7. Further chain extension followed by oxidative C-boron cleavage yielded in alcohol 9. Oxidation and stereoselective Brown crotylation delivered final southern fragment 10.

As shown in Scheme 2 10 was coupled with the protected valine derivative under Yamaguchi conditions to yield 11. Deprotection not only of the Cbz but also of the TBS group together with reduction of the double bond was followed by amide coupling to fragment 2 using HATU as activation reagent. Due to stability problems of the corresponding aldehyde of 2 the authors directly used the primary alcohol in a Krische allylation to synthesize the RCM precursor 12. Metathesis of 12 only resulted in poor yields therefore TMS protection of the primary alcohol was used to protect the substrate from decomposition. The following RCM then proceeds in high yields and final reduction and deprotection led to dysoxylactam A (1) in a total of 15 synthetic steps with around 9% total yield. 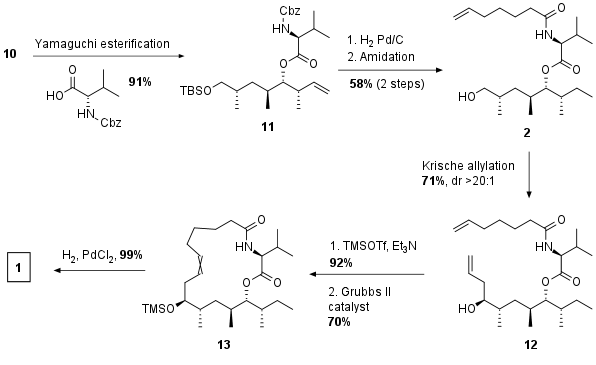 Scheme 2: Completion of total synthesis of dysoxylactam A (1).

The NMR data was recorded at 400 MHz and 100 MHz with deuterated pyridine as solvent. 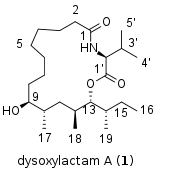