Almost 20 years ago Prof. G. Höfle and his research group isolated the complex polyketides tuscolid, tuscoron A and B from bacteria (Sorangium cellulosum strains). Now the Prof. D. Menche et al. from the University Bonn were not only able to describe the isolation of three new tuscorons furthermore they also determined the relative and absolute configuration of all the polyketides. To prove their hypothesis, they decided to synthesize tuscoron D (1) and E (2). This work was published in Angewandte Chemie in 2019. As shown in Figure 1 they planned for this modular synthesis to introduce the eastern part 5 of the natural product in a late-stage Stille coupling. The furan moiety 3 should be coupled with the central fragment 4 by Mukaiyama aldol reaction.

For the synthesis of the central fragment 4 the Menche group started with geraniol (6, see Scheme 1) and after Sharpless epoxidation with moderate enantioselectivity (82%) and Appel reaction chloride 7 was formed in 80% yield over 2 steps. Alkyne generation and TBS protection of the tertiary alcohol led to 8 in 85% yield. The trisubstituted alkene was then transformed into the diol and periodate cleavage in excellent yield liberated aldehyde 9. This aldehyde was then coupled with substrate 10, a Roche ester derivative. In this substrate controlled aldol reaction, a good diastereomeric ratio could be achieved. Afterward 1,3 syn reduction led to diol 11 in 84% yield 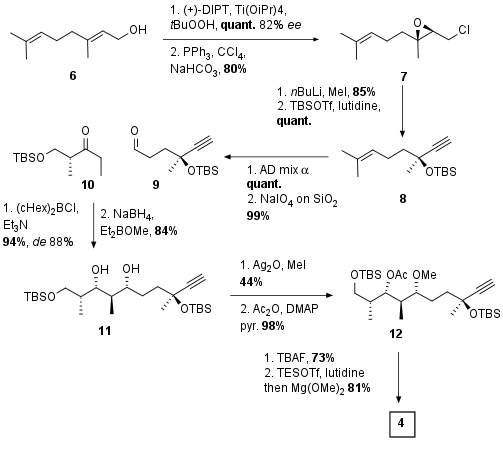 Synthesis of Eastern and Western Fragment

Two different eastern fragments 5a and 5b were needed for the synthesis of both natural products. However, both of them are derived from a common precursor 15 (see Scheme 2). This precursor was synthesized by TBS protection of commercially available 13 (98% yield) followed by carboalumination and trapping with formaldehyde to get alcohol 14. Similar to the synthesis of the central fragment Sharpless epoxidation, Appel reaction, and alkyne formation set the absolute configuration of the tertiary alcohol 15. For the synthesis of tuscoron D (1), deprotection and oxidation led to aldehyde 16. The following Still Gennari reaction (E:Z 2.1:1) led to the unsaturated ester, which was saponified. Under Yamaguchi conditions ring-closing and isomerization of the double bond occurred to finally get 17a in 2 steps from 16. 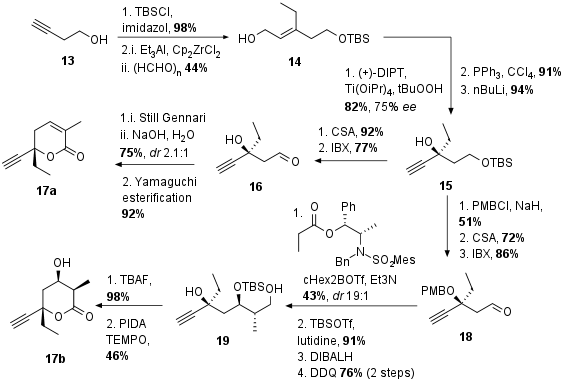 Scheme 2: Synthesis of the precursor 17 for eastern fragment 5.

Lactone 17b was synthesized from 15 by PMB protection of tertiary alcohol, TBS deprotection, and IBX oxidation to aldehyde 18. Aldol reaction with commonly used Masamune auxiliary was followed by alcohol protection, ester reduction, and PMB deprotection to 19. Finally, deprotection and oxidation led to lactonization and synthesis of 17b. As shown in Scheme 3a  both lactones 17a,b could be transformed into 5a,b in a two-step procedure by hydrostannation and followed by halogenation in 52% respective 35% yield. 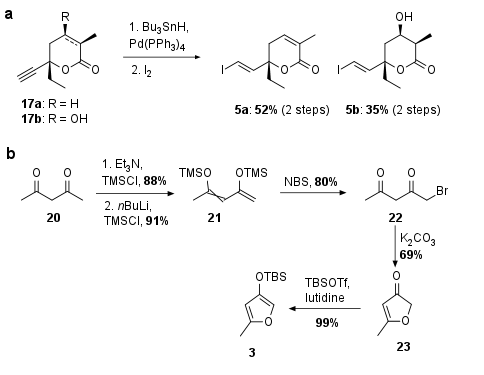 Furane 3 could be achieved in a five-step sequence from dicarbonyl 20 (see Scheme 3b). Enolization of both carbonyl groups led to 21. Selective bromination to 22 was followed by hydrolyzation and spontaneous ring formation to 23. Finally, enolization to 3 was necessary for the following coupling in a Mukaiyama aldol reaction.

With all fragments in hand, the Menche group started to couple the central fragment 4 with furane derivative 3. Oxidation of 4 to aldehyde 24 allowed the attack of furane type enol 3, however with moderate diastereoselectivity (1.2:1). The authors reported that the following deprotection to 25 was challenging due to decomposition. Unfortunately, the lability of these compounds also led to disappointing  results during the final Stille coupling. After hydrostannation of 25 the fragment 26 was coupled with 5a or 5b to finalize the total synthesis of tuscoron D (1, 10% 2 steps) and E (2, 5% 2 steps). 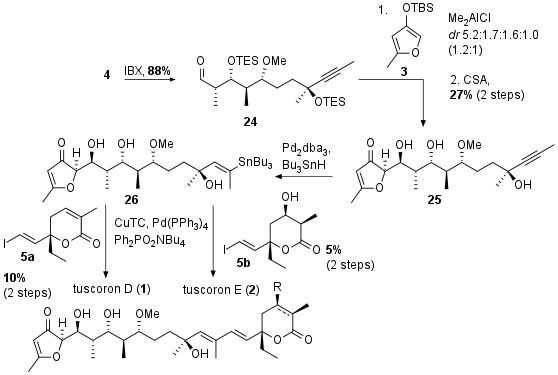 The total synthesis of these two compounds could successfully prove the relative and absolute configuration of the polyketide family. Both tuscorons could be synthesized in 16 steps resp. 21 steps (longest linear sequence) from commercially available material. The research group also described a possible biosynthetic rearrangement for the transformation of tuscolid into tuscorons A-E (not shown).