Total Synthesis of Artemisinin (A. Giannis, 2018)

Artemisinin was discovered in the seventies by Tu Youyou (屠呦呦) and the unique structure of this terpenoid was then published in 1977. For her contributions Tu was awarded with the Nobel Prize in Medicine in 2015. Artemisinin was developed into active derivatives against malaria, which are nowadays widely used. The high biological activity and the interesting structure led to several total syntheses. In 2018 the research group of Athanassios Giannis from Universität Leipzig published in Angewandte Chemie (Int. Ed.) a total synthesis of the not natural (-)-artemisinin (1). 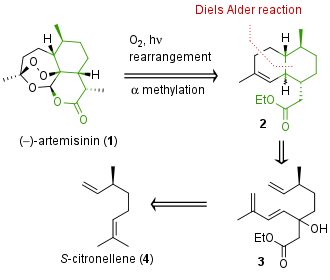 From a retrosynthetic view A. Giannis et al. decided to introduce the methyl group in alpha position in a late stage operation. The unique structure should be formed by a literature known process from precursor 2. This precursor is synthesized by Diels Alder reaction from 3, which itself is derived from citronellene (4).

Synthesis of 3 and Diels Alder Cyclization

Chiral terpene (4) was epoxidized at the trisubstituted double bond followed by oxidative cleavage to the aldehyde. The aldehyde is attacked from organolithium compound generated from 2-methylbut-1-en-3-yne and BuLi to achieve alcohol 5 in 74% yield over two steps. Alkyne reduction (LiAlH4, quant.) and PIDA/TEMPO oxidation (86%) led to the unsaturated ketone 6. After Reformatsky addition Diels Alder precursor 3 was isolated in 86%. Diels Alder cyclization under thermal conditions led to artemsinic acid derivates 7a-c in 91% total yield. 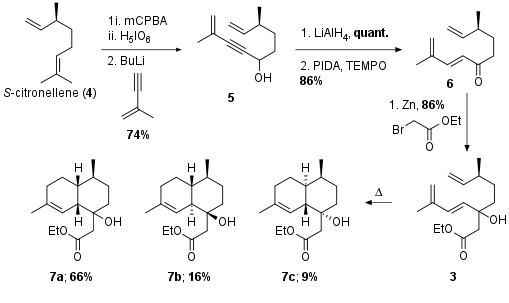 The two diastereomers 7a and 7b were transformed into 2 by dehydration using Martin's sulfurane followed by reduction in good to excellent yields. Both isomers could be used for the rearrangement to 10, which is already described in literature. The detailed mechanism is not known, however one possible mechanism includes the formation hydroperoxide 8 by Schenk Ene reaction followed by a Hock cleavage to carbonyl 9 which readily cyclize to 10 in 32% total yield. Finally, alpha methylation and inversion of the stereocenter led to 1.

Scheme 2: Completion of total synthesis of 1.

(-)-artemisinin (1) was synthesized in eleven steps from commercial available starting material. The authors also tested the biological activity of this not natural isomer, which revealed similar activity against a malaria strain (P. falciparum NF54) compared to the natural isomer (+)-artemisinin. The authors also underline the possibility to synthesize derivatives with this route for further medicinal research.