Ritterazine B (1, Figure 1) is an alkaloid bearing a pyrazine core with two pseudodimeric sites. The alkaloid was already isolated in 1995 and promising bioactivity was reported. However, due to the overall complexity no total synthesis was reported for more than 25 years. Recently, the research group of Prof. Sarah E. Reisman (California Institute of Technology, USA) was able to describe the first total synthesis in the journal JACS. The retrosynthetic analysis starting from a late-stage coupling of two similar fragments 2 and 3. Both fragments should be available using similar approaches like a spiroketalization as one of the key steps. Both precursors 4 and 5 itself should be available from the same commercially available starting material 6. 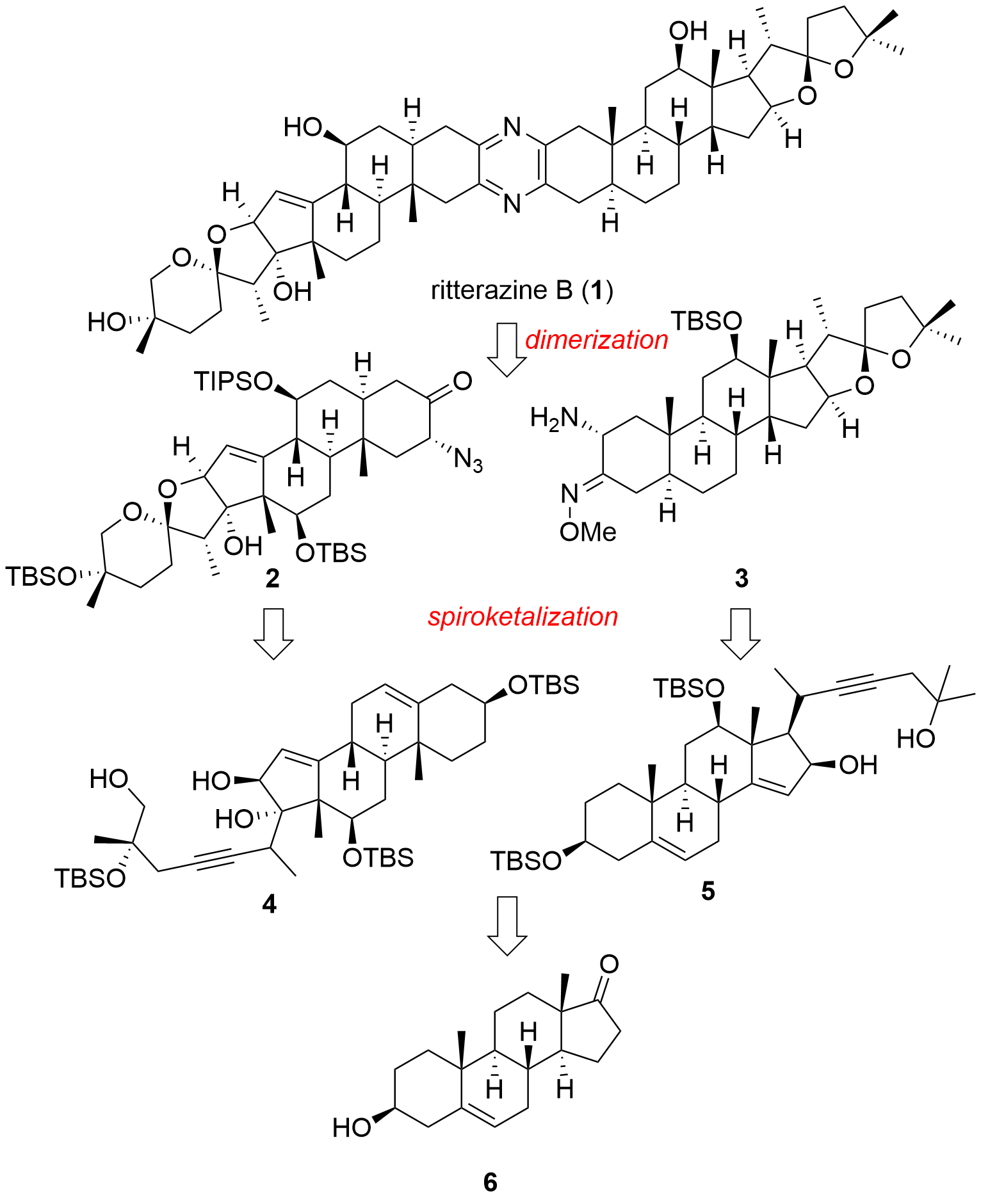 Figure 1. Retrosynthetic analysis for the total synthesis of ritterazine B (1) by the Reisman group.

Synthesis of the common precursor

Both fragments 2 and 3 should be available from a common precursor 9. The Reisman group decided to synthesize 9 in six steps from commercially available ketone 6 as shown in Scheme 1. After β hydroxylation to 7, both alcohols were protected as TBS ether directly followed by α bromination using NBS. The following debromination and TMS enol ether formation was followed by oxidation to gave α hydroxy ketone 9 in overall good to very high yield. 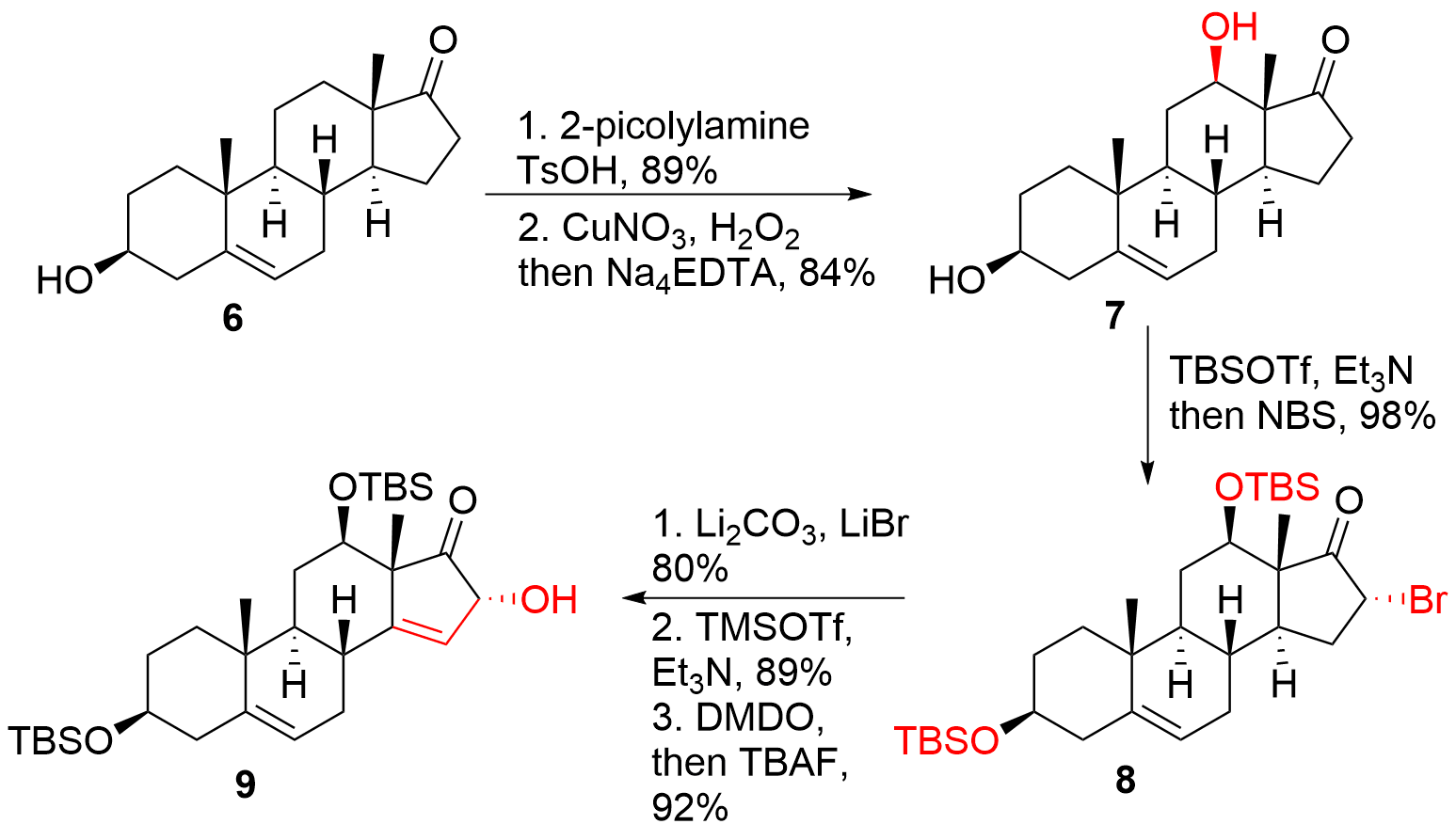 As shown in Scheme 2 the western fragment 2 was synthesized starting from allyl chloride 10. After nucleophilic substitution with PMPOH, dihydroxylation gave 11 in both excellent yield. The Reisman group then transformed the primary alcohol into a leaving group using TsCl and coupled it with 12 by organometallic substitution to 13. Then Appel reaction was followed by protection of the tertiary alcohol. With 14 in hand, coupling with 9 was followed by [Cu] catalyzed Stahl oxidation and PMP deprotection to the desired coupling product 15.  For the synthesis of cyclization precursor 4 the ketone had to be reduced. Then [Au] catalyzed cyclization gave 16 as a single isomer. Note, that the methyl group (marked green in 15) epimerized to deliver the desired diastereomer. Then, allylic oxidation and regioselective reduction yielded in 17. The resulting alcohol was protected as TIPS ether and TBS deprotection and oxidation gave 18 which was finally transformed into 2 by a literature-known two-step procedure. 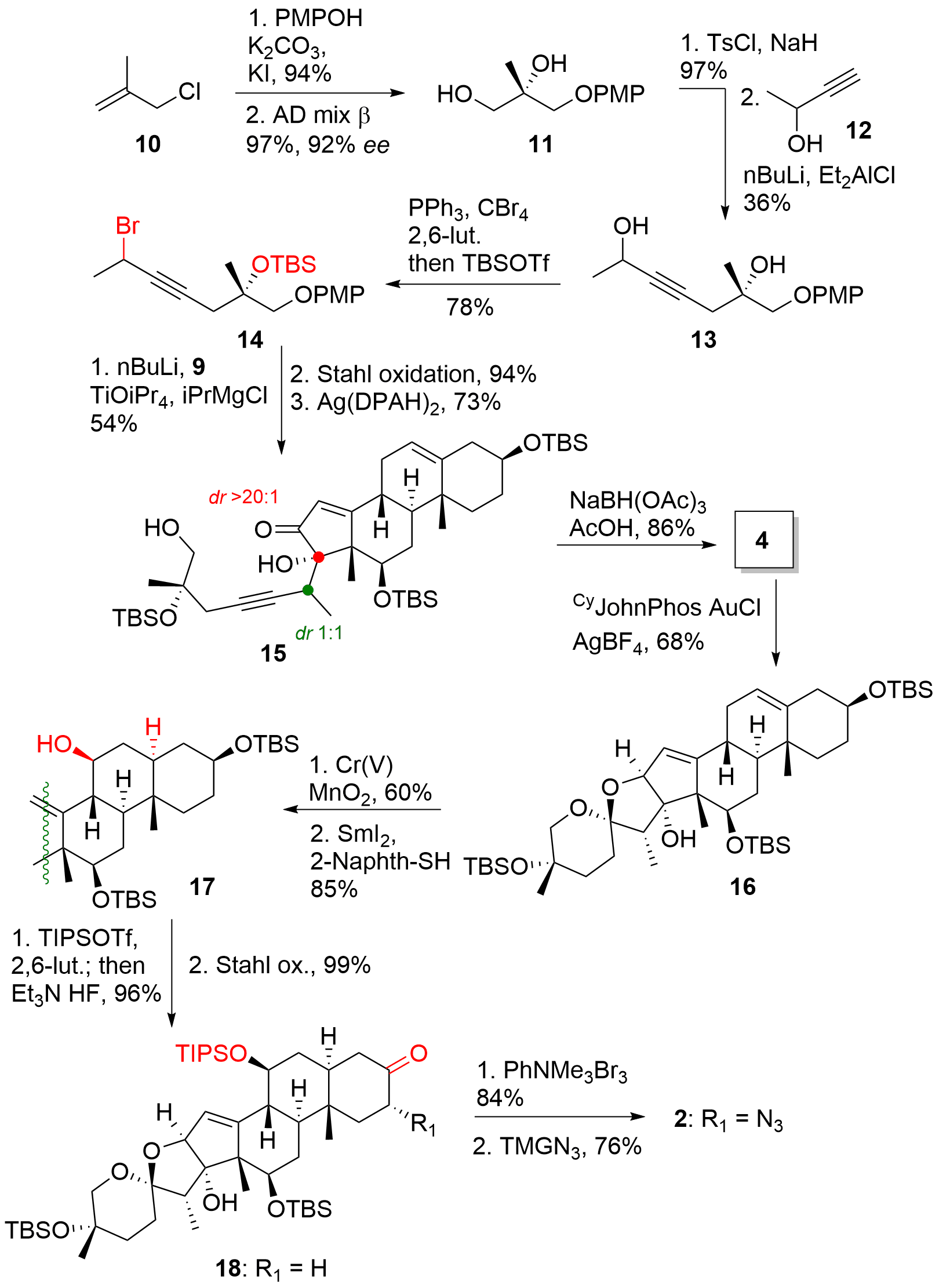 Using a similar approach, eastern fragment 3 was synthesized as shown in Scheme 3. Therefore, the Reisman group this time coupled 12 directly with commercially available 19 which gave bromide 20 after Appel reaction and alcohol protection. Then coupling with 9 and TMS deprotection yielded in 21 again as a 1:1 diastereomeric mixture of the methyl group. In a three-step protocol, α hydroxylation and inversion of the alcohol yielded in cyclization precursor 5 which again was subjected to similar conditions for the formation of spiroketal 22 also again as single isomer. This time, both alkenes were reduced and oxidation of the alcohol resulted in ketone 23. As a precursor for the pyrazine a four-step procedure was needed to liberate eastern fragment 3. 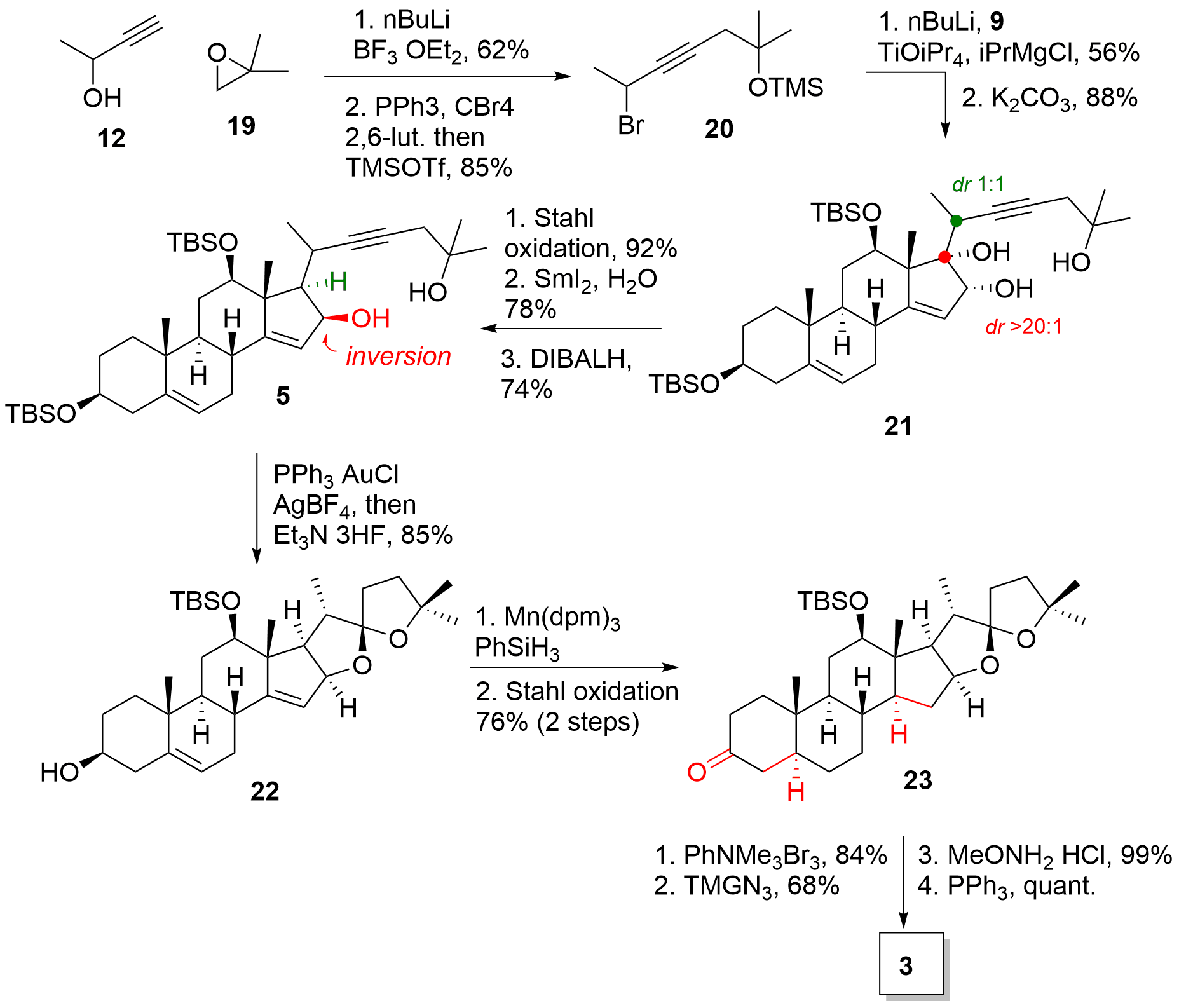 With both main fragments in hand, a two-step protocol delivered ritterazine B (1) from fragment 2 and 3 as shown in Scheme 4. In detail the coupling with 57% yield to form the pyrazine ring was followed by deprotection of all four silyl ether liberating the desired alkaloid 1. 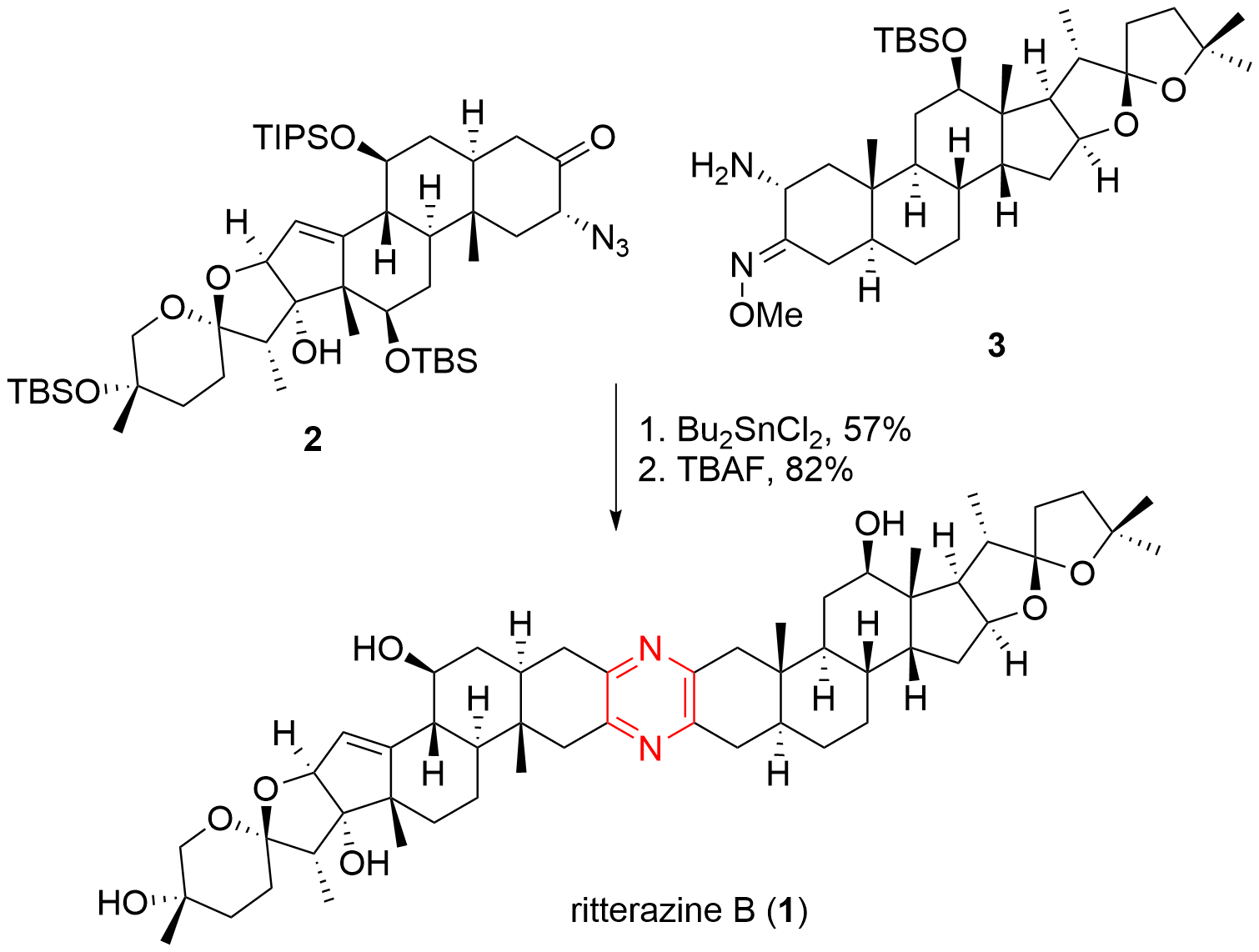 Scheme 4. Completion of the total synthesis of ritterazine B (1).

In conclusion the Reisman group was able to report the first total synthesis of ritterazine B (1) in 19 steps for the longest linear sequence (36 steps in total).  Using a unified approach for the western and eastern part the Reisman group could minimize the complexity of the total synthesis. The key-steps of this synthesis were the [Au] catalyzed spiroketalization and the late stage dimerization.