Despite reported for the first time over 200 years ago, the lignan olivil (1, see Figure 1) never been synthesized.  In a recent publication, the research group of Prof. S. Hanessian from the Université de Montreal successfully described the first total synthesis of 1 together with related lignans like cycloolivil (2) and alashinol F (3) from a common precursor 4. This total synthesis also confirms the absolute and relative configuration of the polyphenols. 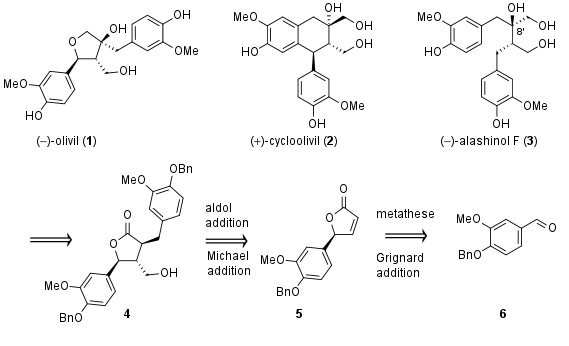 The common precursor should be available from 5 by an aldol addition and 1,4-Michael addition. Butyrolactone 5 itself is derived from 6 by Grignard addition and metathesis.

Starting from benzaldehyde derivate 6 addition of vinylmagnesium bromide led to racemic 7, which is transformed into the enantiomeric pure isomer by enzymatic deracemisation in 90% yield as shown in Scheme 1. The alcohol 7 was transformed into the ester and ring-closing metathesis yielded in butyrolactone 5 in 71% yield over two steps. The usage of vinylmagnesium bromide together with cupper introduced the vinyl moiety in 1,4 position to the ketone. Enolization of 8 followed by aldol addition with 6 was followed by benzylic deoxygenation in 66% yield over two steps. Lemieux Johnson oxidation by oxidative cleavage and reduction of the aldehyde delivered fragment 4 in 10 steps from literature known compounds. 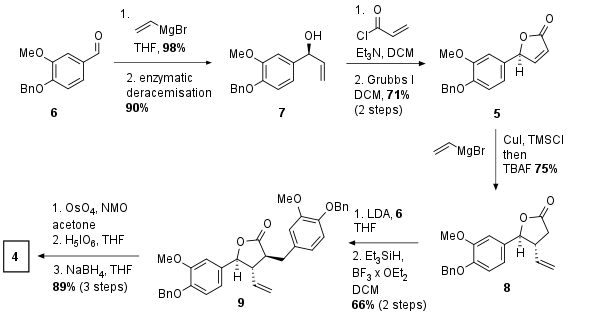 With key fragment 4 in hand, the Hanessian group explored the access to different lignans. After protection as napthylmethylether, alpha hydroxylation gave the two diastereomers 10a and 10b in 91% total yield. Substrate 10b already represents the protected (+)-cephafortin A (11), which was liberated by reductive cleavage of the protecting groups. Hereby absolute configuration could be revised. For the synthesis of alashinol F (3) lactone 10b was reduced to the triol 12 in 43% yield along with the hemiacetal (37%, not shown). The primary alcohol was transformed into the sulfonyl ester, which led to the cyclization to tetrahydrofuran 13 in good yield. Finally, removal of the protecting groups by hydrogenation was accompanied by reductive cleavage of the benzylic alcohol to achieve alashinol F (3). 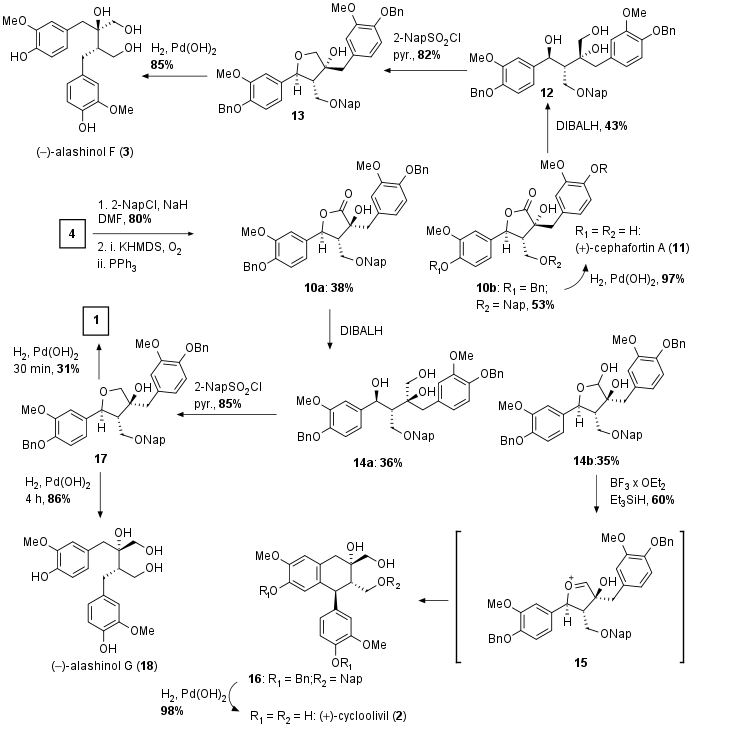 Alternatively 10a could be transformed into triol 14a and hemiacetal 14b by DIBALH reduction. Further reduction of substrate 14b led to oxonium ion 15, which in situ rearrange to bicyclus 16. Final deprotection liberated (+)-cyclolivil (2). For the synthesis of olivil (1), triol 14a was cyclized in the same way as described before and deprotection of 17 led to (-)-olivil in only 31% yield probably due over-reduction to (-)-alashinol G (18), the 8' epimer of alashinol F (3).

In total the research group of Prof. S. Hanessian successfully described the total synthesis of several olivil type lignans from a common precursor. This finally led to the correct assignment of the absolute and relative configuration and also gave insights into possible biosynthetic pathways, which are discussed in the publication (not shown here).