Tronocarpine (1, see Figure 1) is a pentacyclic alkaloid isolated from the plant species Tabernaemontana corymbosa two decades ago by T.-S. Kam, K.-M. Sim and T.-M. Lim from the University of Malaya (Malaysia). In 2020, the first enantioselective total synthesis was reported by F.S. Han and coworkers, which delivered 1 in 20 steps from commercially available substrates. Now, the research group of Kosuke Namba from the Tokushima University (Japan) was able to report a second synthetic report aiming for a more concise total synthesis of this alkaloid. As shown in Figure 1, tronocarpine (1) should be available from 2 by late-stage functionalization. In their key step 2 should be available from 3 in a one-pot reaction. During this tandem cyclization, two C-N bonds and one C-C bond should be established in a highly diastereoselective fashion including one quarternary center. The indole 3 itself should be available from literature-known compounds 4 and 5. 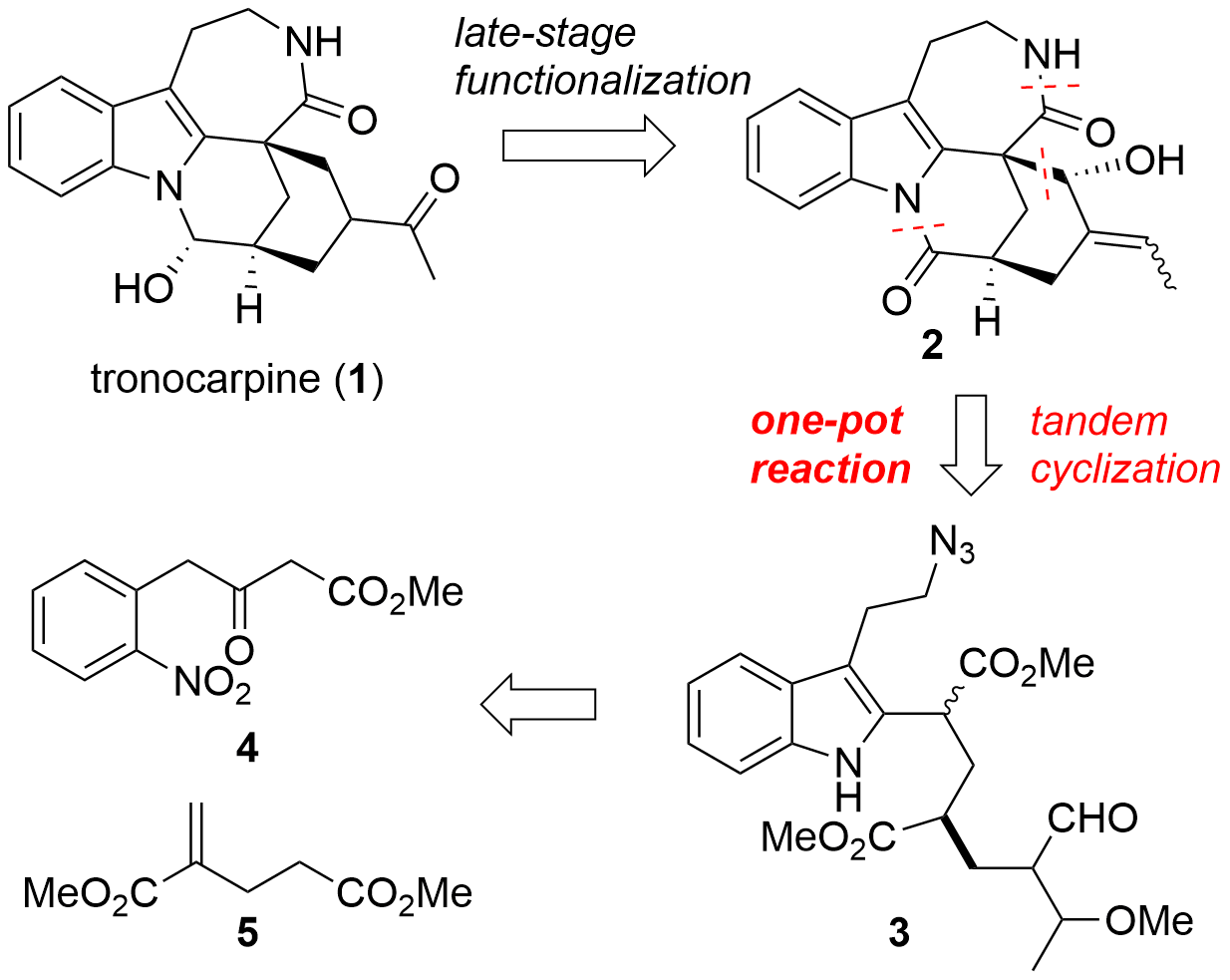 For the construction of the indole moiety 4 and 5 (see Scheme 1) were chosen by the Namba group, which are both available in one step by literature-known procedures. The addition of tributylphosphine led to the formal 1,4-addition of dicarbonyl enolate 4 to unsaturated system 5 (for details see Tetrahedron 2005), then indole was introduced under reductive conditions yielding in 6 as a diastereomeric and enantiomeric mixture. This was followed by reductive coupling with 7 and azide formation to 8 in 56% resp. 93% yield. Reduction of the most accessible ester to the aldehyde was with 52% yield surprisingly selective and followed by the formation of the silyl enol ether. The enolate was then directly subjected to acetaldehyde in a Mukaiyama aldol reaction yielding in 3 in 35% yield. The authors noted, that they also were able to isolate side products because of hemiaminal and acetal formation (25%). These side products were easily transformed into 3 using amberlyst 15.

Tandem cyclization and completion of the total synthesis

As shown in Scheme 2, the pentacyclic core structure of tronocarpine (1) was established in a single pot reaction from precursor 3 in 70% yield. First, the addition of a soft base at 0°C led to the formation of unsaturated aldehyde 9 by elimination. Then at higher temperatures, enolate formation and attack of the aldehyde led to aldol product 10 as a diastereomeric mixture (alcohol and double bond). In the next transformation, amide formation was observed to deliver intermediate 11. The addition of Pd under H2 atmosphere led to the second lactam formation. Finally, the addition of base yielded in the diastereomeric pure product 2 by retro-aldol/aldol equilibration. With 2 in hand, the synthesis of alkaloid 1 was finished by 1,3 rearrangement of the hydroxy group and reductive opening of the lactam to 12 (61%) and final oxidation and aminal formation to 1 in 89%. 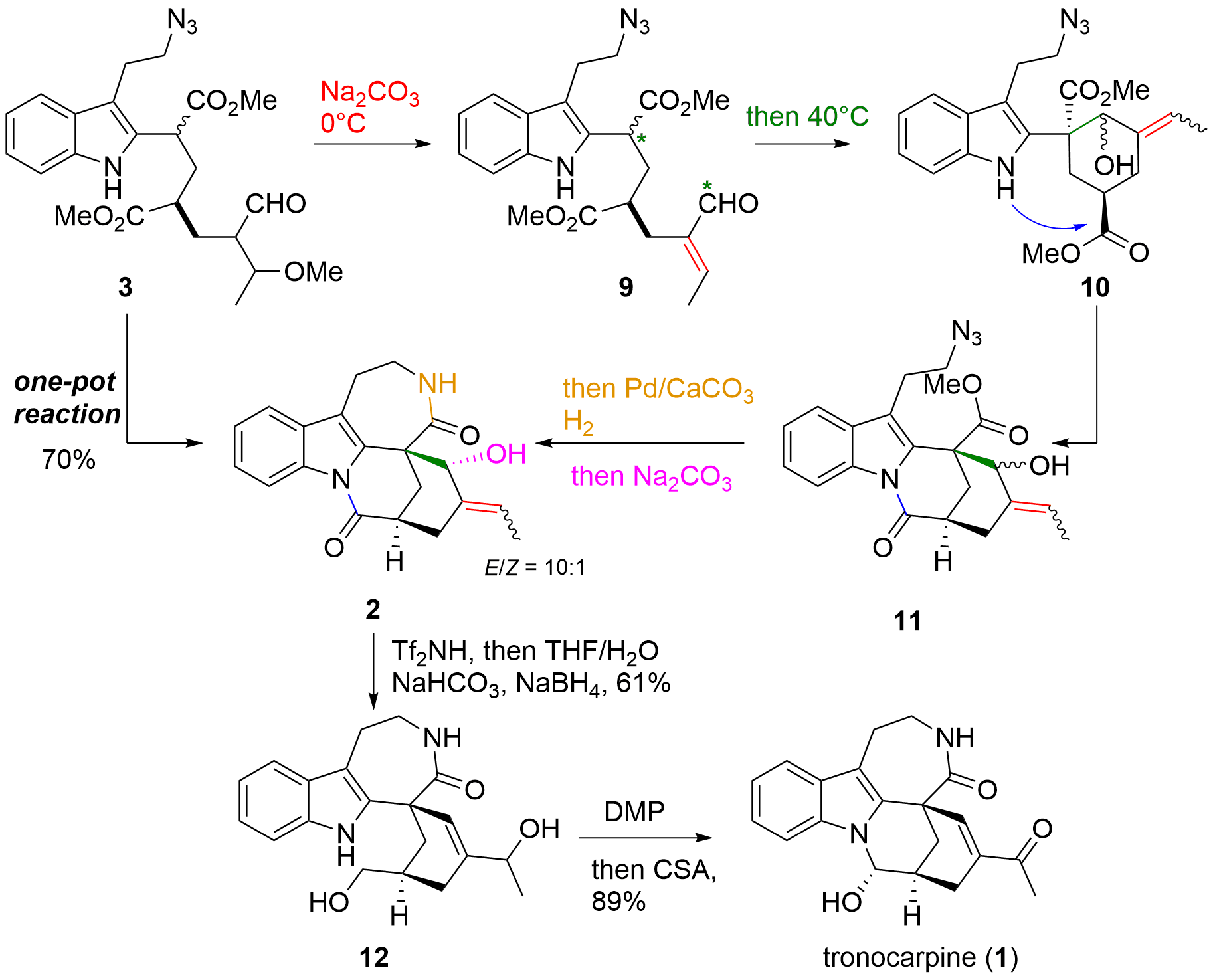 Scheme 2. Tandem cyclization and completion of the total synthesis of tronocarpine (1).

For an enantioselective version of this total synthesis, racemic 6 could be separated into the enantiomers by enzymatic resolution (not shown). In total, the Namba group described a new short total synthesis of the alkaloid 1 featuring unique access to the pentacyclic core skeleton by an impressive one-pot tandem cyclization. With this key step, they were able to synthesize 1 in only 9 steps from commercially available material.

Previous
Total Synthesis of Thebainone A (P. Metz, 2020)
Next
Polyketides