Halioxepine (1, see Figure 1) is a meroterpene isolated in 2011 by Junichi Tanaka and co-workers from a marine sponge (Haliclona sp.). The terpene includes five stereocenters, two of them are in the western part (at C10 and C15) and three in the eastern part (at C1, C2, and C7) of the molecule. The Tanaka group proposed for each of the two parts the relative configuration, however, the relation of both parts couldn't be resolved. In the western part, they proposed an anti-relationship between the two methyl groups. Later, the absolute configuration of the alcohol (at C1, eastern part) was determined in a derivative (halioxepine C, not shown) using Mosher ester analysis. Keeping this in mind, theoretical two isomers are possible with a fixed (relative and absolute) eastern part and two possible isomers in the western part (with fixed anti-relationship and different absolute configuration). However, synthetic efforts by the Markus Kalesse group (Leibniz University of Hannover, Germany) revealed, that the proposed relative configuration of the western part was wrongly assigned. In their publication published in Chemistry - a European Journal they could successfully describe the first total synthesis of ent-halioxepine (1) and revise the absolute and relative configuration of the terpene. 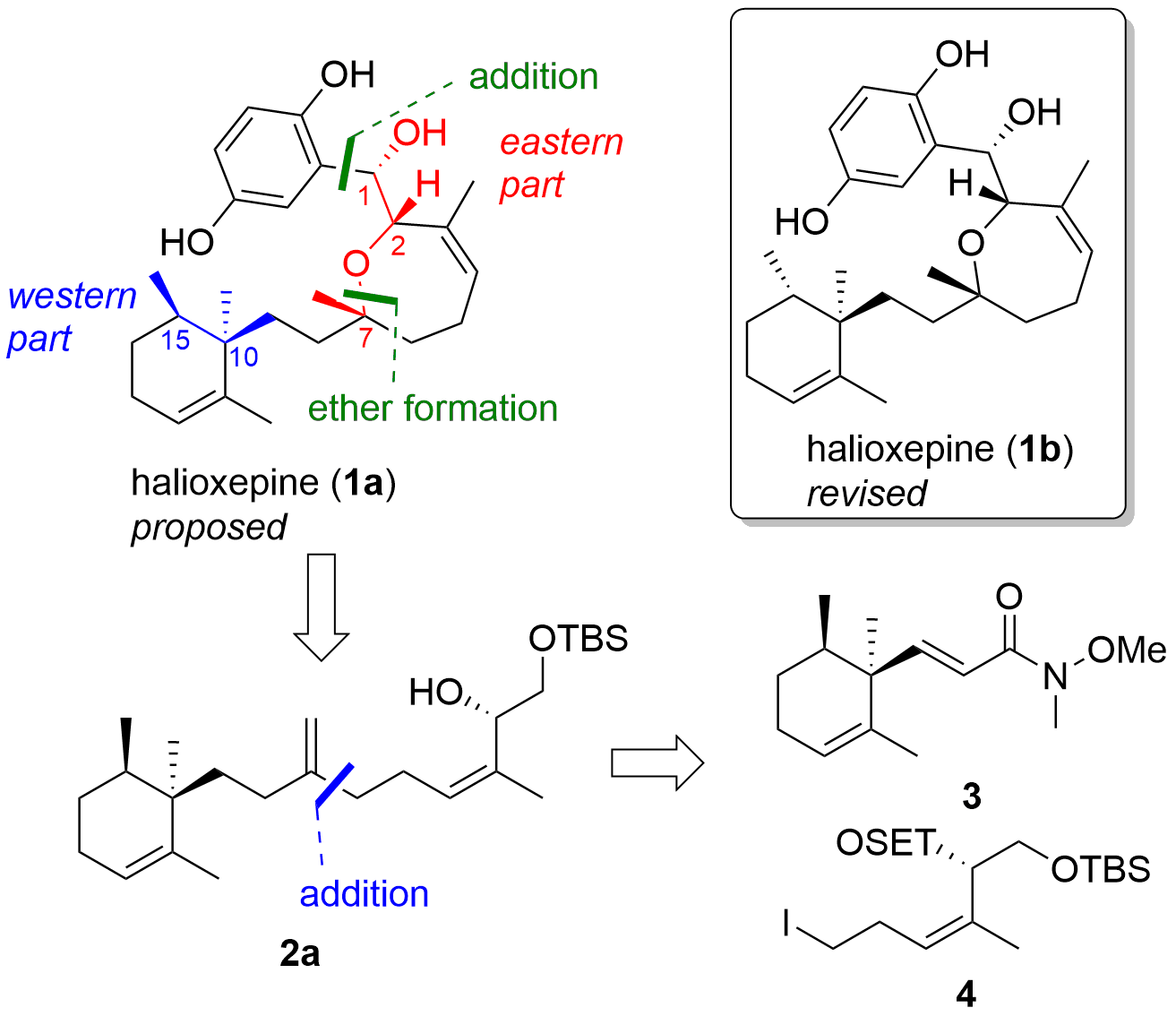 Synthesis of fragments 3 and 4

For the synthesis of amide 3, cyclohexenone (5) was methylated in 1,4-position using chiral copper ligand L, acylated, and finally methylated in 1,2 position yielding in dicarbonyl 6 in 61% yield with good enantio- and diastereoselectivity (see Scheme 1a). Then methylation of the ketone was followed by elimination to unsaturated ester 7 which was directly transformed first into the aldehyde 8 and HWE reaction with 9 gave Weinreb amide 3. 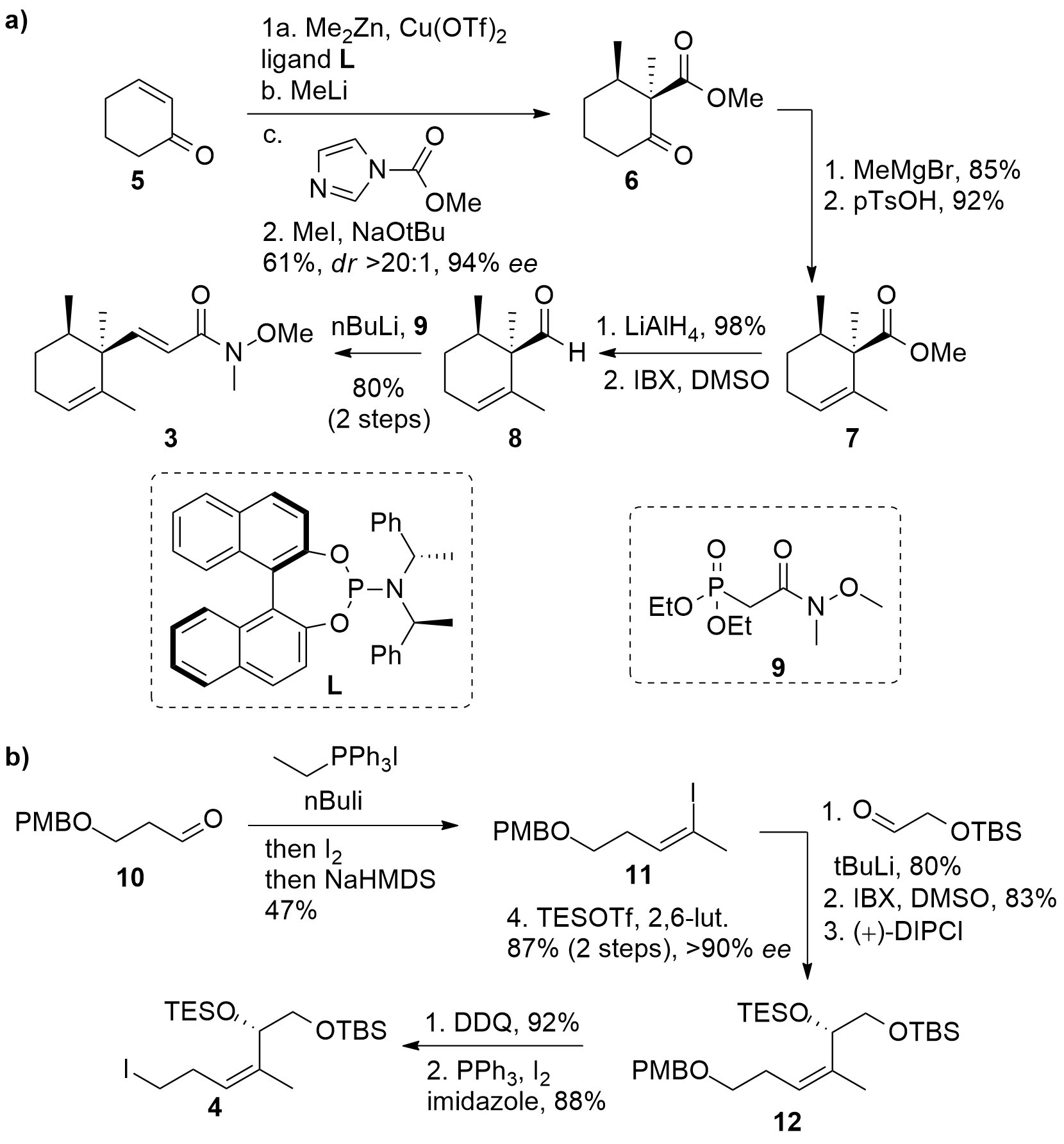 For the synthesis of iodide 4 (Scheme 1b), aldehyde 10 was treated with EtPPh3I salt and BuLi and later transformed into iodide 11. Using lithium iodide exchange organometallic addition was possible and after oxidation and enantioselective reduction 12 was liberated in 4 steps after TES protection. Then PMB deprotection and Appel reaction finally yielded in the desired fragment 4.

Coupling of the main fragments and synthesis of 1a

With both main fragments in hand, the Kalesse group decided to couple them by organometallic addition of lithiated 4 to amide 3 as shown in Scheme 2. The resulting unsaturated ketone 13 was reduced (1,4-reduction) and the ketone was transformed into the methylene and TES deprotection led to cyclization precursor 2a. Using an iodoetherification protocol together with the following reductive deiodination delivered 14 in good yields, however, the diastereomeric control was low. Both isomers could be separated after TBS deprotection and oxidation of the alcohol led to aldehyde 15. To complete the total synthesis 15 was coupled by organometallic addition with deprotonated hydroquinone and TBS deprotection liberated 1a. However, spectral data of 1a significantly was different from the natural terpene. 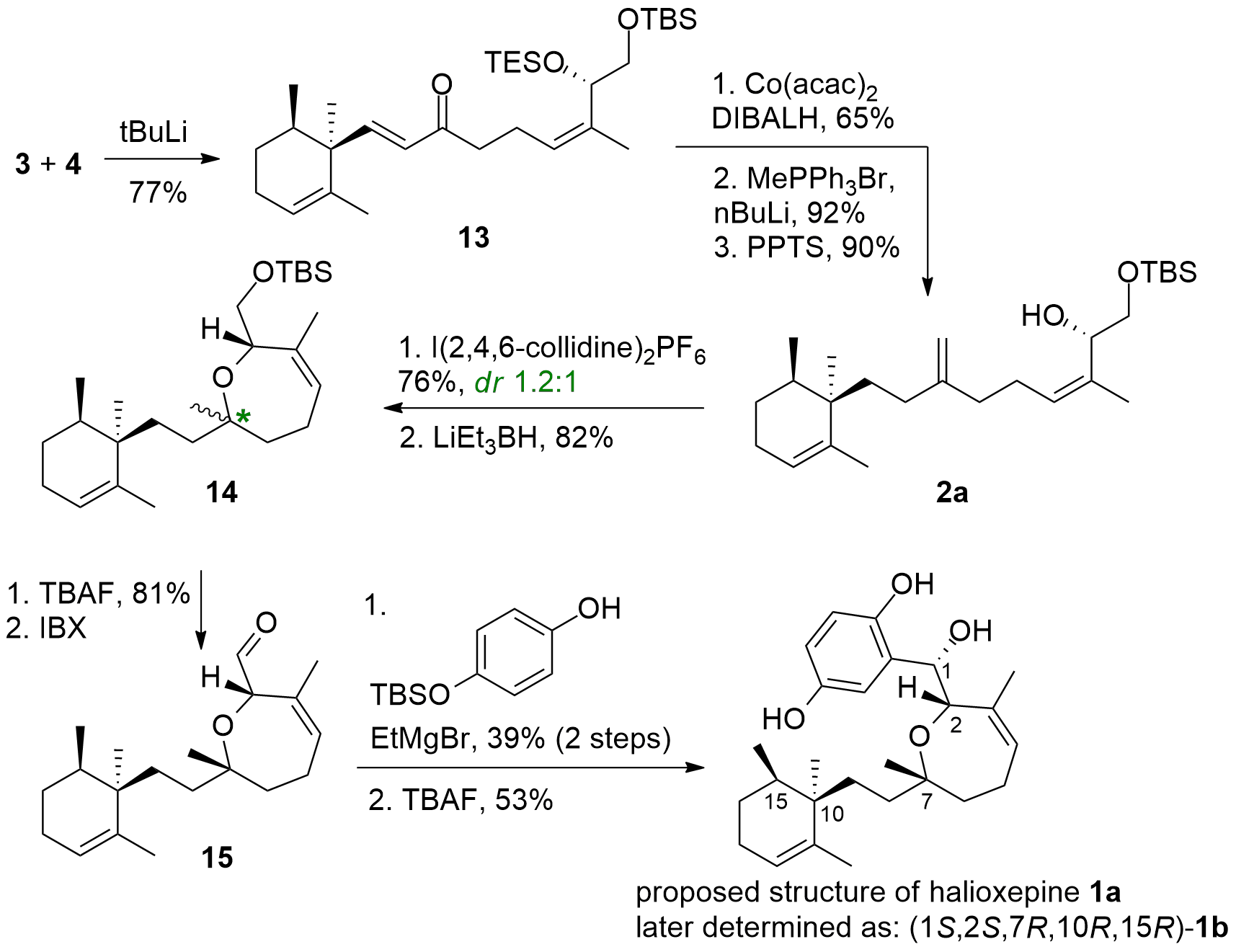 The Kalesse group now decided to target 1c (Scheme 3) assuming to synthesize ent-halioxepine by changing the relative configuration of the western part towards the eastern part of the molecule. Therefore, they changed the absolute configuration at the alcohol C1 by oxidation and stereoselective reduction of alcohol 2a to yield isomer 2c. Using a similar approach as above, they were able to synthesize 1c, which again showed major differences in the spectral data compared to the authentic sample.

By comparison with other literature data, the Kalesse group now proposed a misassignement of the C10 methyl group. This wrongly assigned methyl group would explain the differences in the spectral data, however, the relationship between the eastern and the western part would still be unknown. To solve this, they decided to synthesize the isomer halioxepine 1d (Scheme 4). Therefore a slightly different approach to the western fragment was necessary. First cyclohexenone 17 was 1,4-methylated to 18 and Michael reaction of the enamine with methyl acrylate yielded in 19 as a single isomer. Reduction of the carbonyls was followed by the selective protection of the primary alcohol and the oxidation of the secondary alcohol to the ketone 20. Again methylation of the ketone and elimination should deliver the alkene, however, this time [Rh] catalyzed isomerization to the endo double bond was needed. Under these conditions, TBDPS was deprotected and IBX oxidation gave 21. Using the established coupling protocol from above, 17 was coupled with fragment 4, and oxidation followed by methenylation gave isomer 2d. Using the established protocols 1d was synthesized, which again was only an isomer of the authentic sample. Therefore, isomer 1e was targeted which was believed to be the enantiomer of halioxepine. Inversion of the configuration at C1 was again achieved by oxidation and stereoselective reduction of 2d to 2e. Finally, 2e was transformed into ent-halioxepine 1d which shares the same NMR spectral data as the authentic sample, however with an inverted optical rotation. 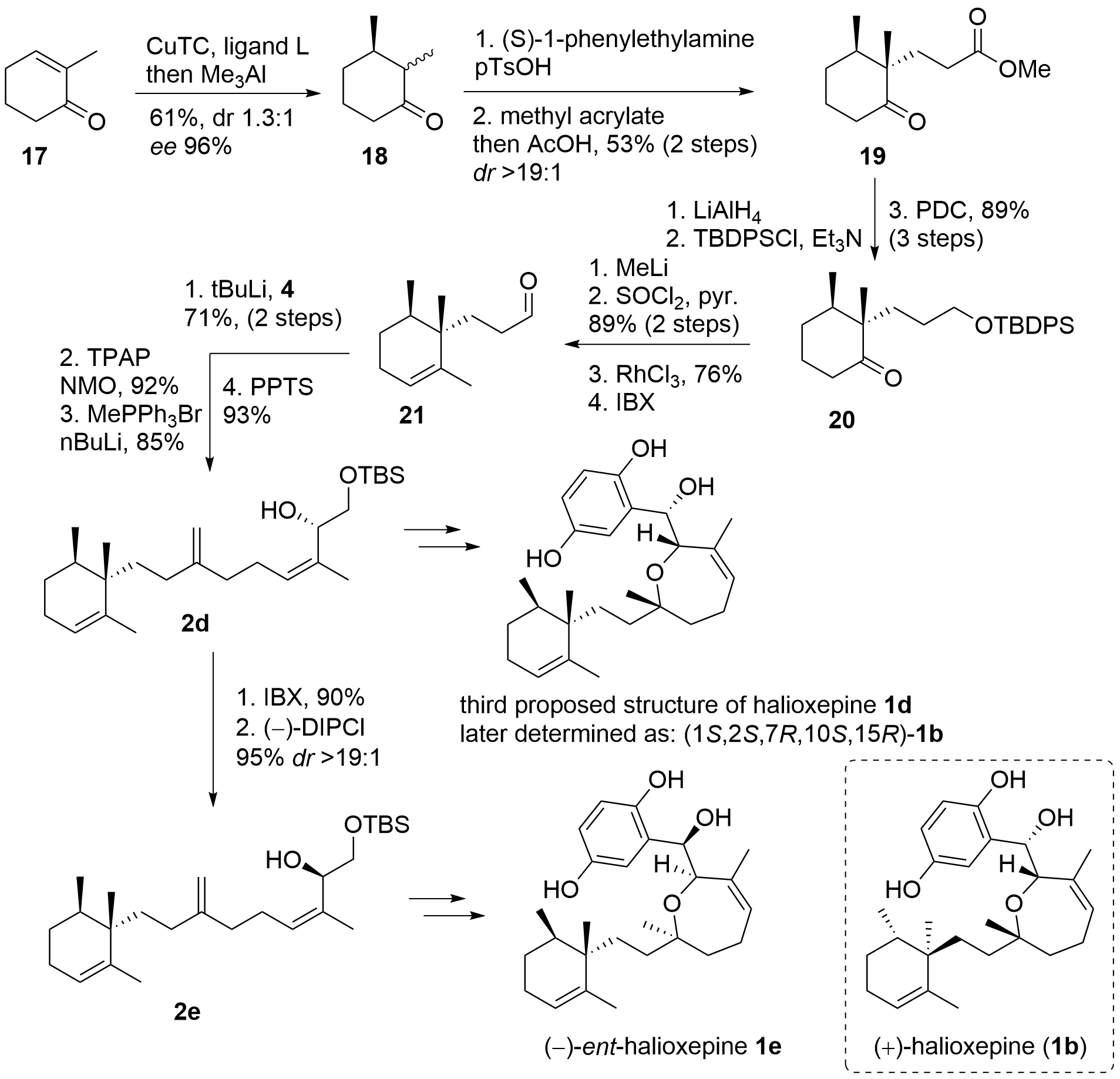 Scheme 4. Completion of the total synthesis and structural revision of halioxepine (1).

In the end, the described total synthesis revealed the relative and absolute configuration of halioxepine after extensive synthetic efforts. This research not only highlights the importance of total synthesis for the structural determination of natural products, but also the uncertainties and risks doing total synthesis research. However, finally C. Poock and M. Kalesse were able to report successfully a synthetic route to the terpene.