Complex terpenoids like 10,11,12-trihydroxy tremulenone (1), cocenolide C (2) and E (3, Figure 1) are synthesized by nature through first cyclization of nearly unfunctionalized polyalkene (e.g. farnesyl diphosphate) followed by functionalization (e.g. oxidation) in a second step. Using biomimetic cyclization approaches the total synthesis of these terpenes often lack selectivity due to unwanted side reactions like eliminations and substitutions of carbocation intermediates. Furthermore, selective late-stage oxidation of cyclized intermediate proofed to be challenging transformations.  Recently the research group of B. Trost from Stanford University (USA) decided to develop a new approach, in which the final substitution pattern is already present in cyclization precursor. In Nature Chemistry they describe a synthetic approach to 1-3 by cyclization of common precursor 5 to intermediate 4, which is then transformed into the terpenoids. 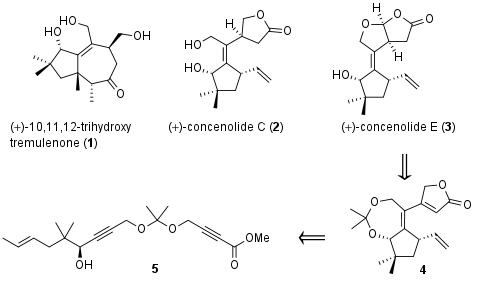 Figure 1: Terpenoids 1-3 and a retrosynthetic approach for their synthesis.

Starting with dialkyne 6 treatment with Butyllithium followed by methyl chloroformate yielded in monosubstituted ester 7 in good yield as shown in Scheme 1. Then, under asymmetric catalysis with proline derived ligand 8, chiral substrate 5 could be achieved in 71% yield with 95% ee. The Trost research group was now able to cyclize this precursor in their key step under [Pd] catalysis to 9, which underwent lactone formation to 4 after partial acidic cleavage of the diol protecting group. 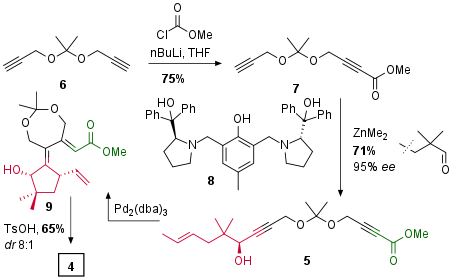 For the completion of the total synthesis of concenolide E (3, see Scheme 2) common precursor 4 was transformed into the silyl dienol ether and epoxidation followed by ring opening gave oxidized product 10. [1,4]-copper hydride  reduction with chiral ligand led to the saturated ketone and after acidic cleavage of the protecting groups final terpenoid 3 could be achieved as single stereoisomer. In a similar procedure concenolide C (2) could be synthesized by the Trost group. The same copper-catalyzed reduction gave 11 and after acidic cleavage of the protecting groups concenolide C (2) was liberated in one step from 4. Intermediate 11 could also be trapped as acyl selenium compound 12 through saponification of ester 11 and the addition of activated phenyl selenide. Radical cyclization finally led to 1 after acidic deprotection in 40% yield. 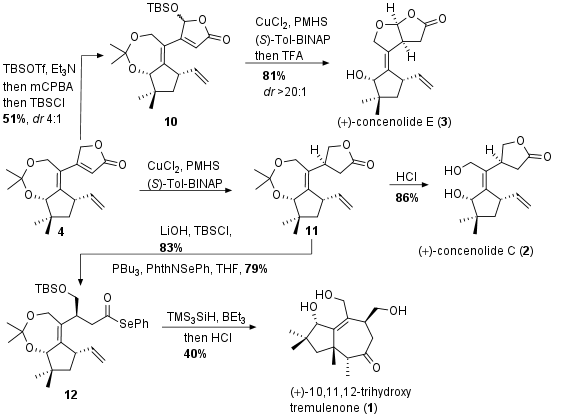 In summary, the Trost group could successfully describe an access to terpenoids using a novel cyclization strategy, which tolerates several functional groups. With this strategy, they were able to synthesize several terpenes in 5 resp. 6 linear steps.