The terpenoid manginoid A (1, see Figure 1) is a polycyclic terpenoid bearing a spirocyclohexanedione moiety isolated in 2017. Now, the research group of Scott Snyder from Chicago University (USA) was able to describe a synthetic access in the journal Angewandte Chemie. The Snyder group employed a challenging pinacol coupling to form the spirocyclic system 2 from dicarboxylic structure 3, which itself is available from 4 by the differentiation of the two primary alcohols. 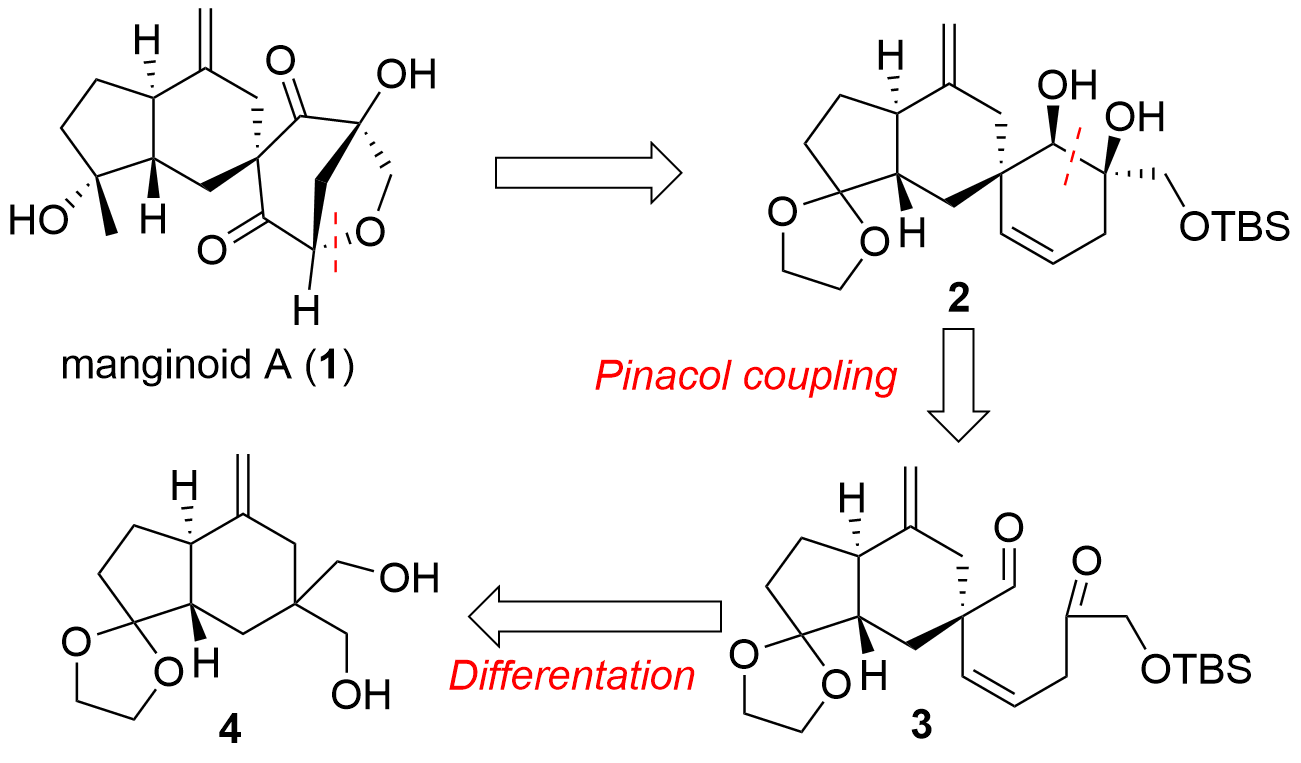 Figure 1. Retrosynthetic analysis for the total synthesis of manginoid A (1).

For the synthesis of diol 4 (see Scheme 1) the Snyder group decided to start with the literature-known cyclopentanone 5, which is available from cyclopentenone in one step (not shown). Enolization and the following Mukaiyama-Michael addition with 6 led to α,β-disubstituted ketone 7. However, problems in regioselectivity (2.5:1) of the enolate formation and yield were observed. Under acidic conditions, epimerization in α position occurred which was followed by ketone protection and allylic chlorination to afford 8 as a single isomer. Finally, ring-closing and reduction of the esters to the diol led to the desired fragment 4 in six steps. 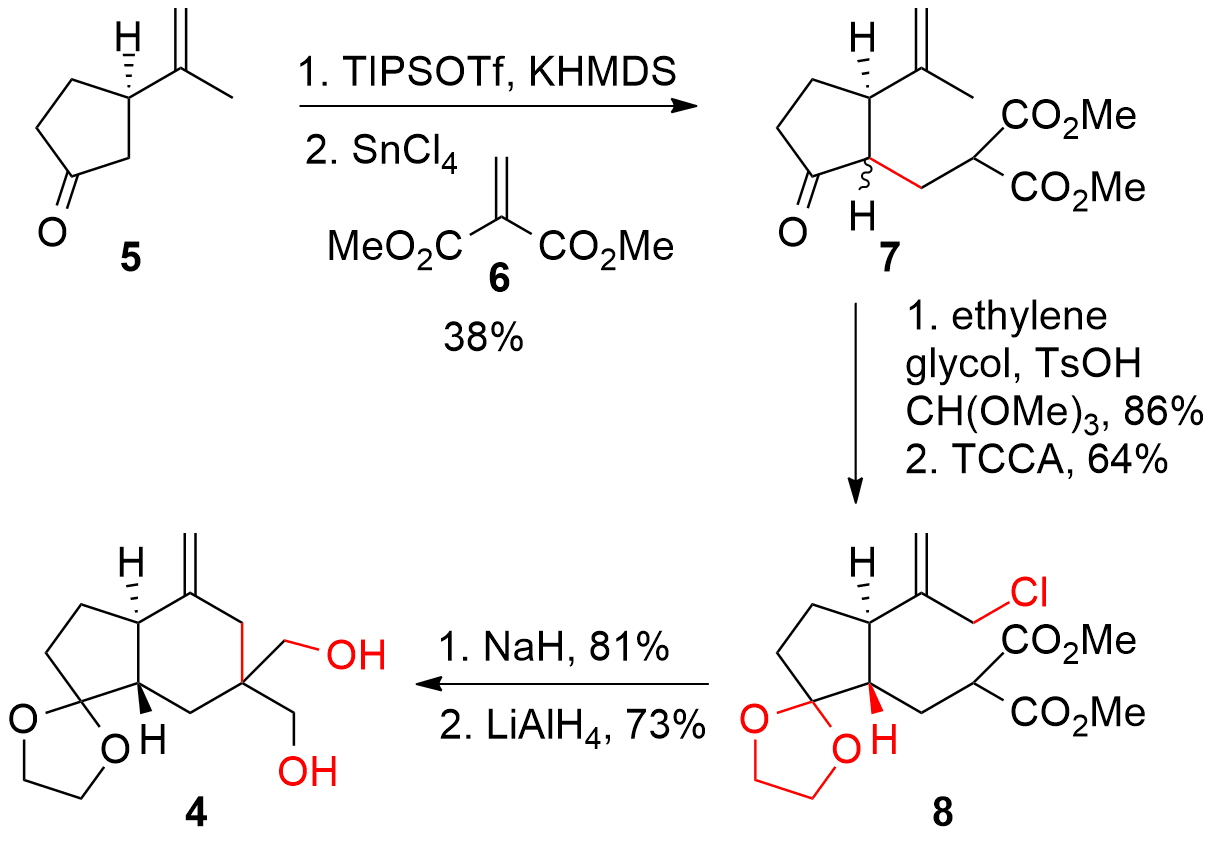 Synthesis of the precursor for pinacol coupling

The differentiation of the two primary alcohols was achieved by iodoetherification induced by NIS as shown in Scheme 2. Only the primary alcohol at the upper side is able to form the ether linkage. The other alcohol was then oxidized and transformed into the terminal alkyne 9 using the Bestmann Ohira reagent. Deprotonation and addition of epoxide 10 were followed by reductive iodoether cleavage to achieve 11 in two steps. Finally, reduction of the alkyne to the alkene using poisoned Pd on coal and oxidation of the alcohols delivered the desired dicarbonyl for the following pinacol coupling. 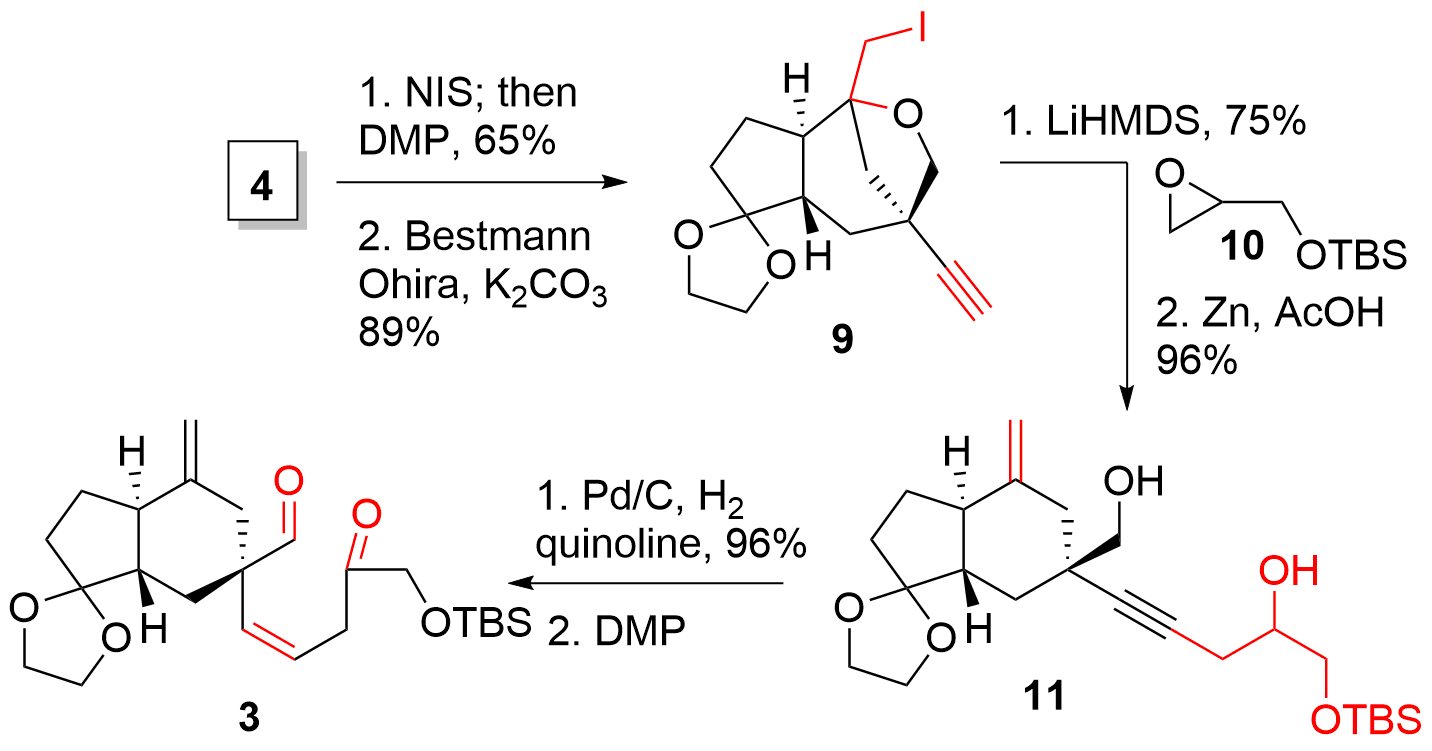 The authors described the potential drawbacks of the envisioned pinacol coupling like unknown diastereoselectivity or decomposition because of the highly delicate dicarbonyl system. Taking this into account, the low yield of the coupling to diol 2 is reasonable. As shown in Scheme 3 the remaining double bonds were treated with NBS to form the bromoether in the northern part of the molecule and in the southern part the epoxide was formed after bromohydrin formation with H2O2. The authors noted, that only this indirect formation of the epoxide successfully gave the desired stereoinformation of 12. In the following sequence, treatment with BuLi led to the cleavage of the bromoether, and deprotection of the primary alcohol was followed by epoxide opening under basic conditions yielding in 13. Oxidation using Swern condition and ketal cleavage liberated 14, which was transformed into manginoid A (1) by regio- and stereoselective methylation. 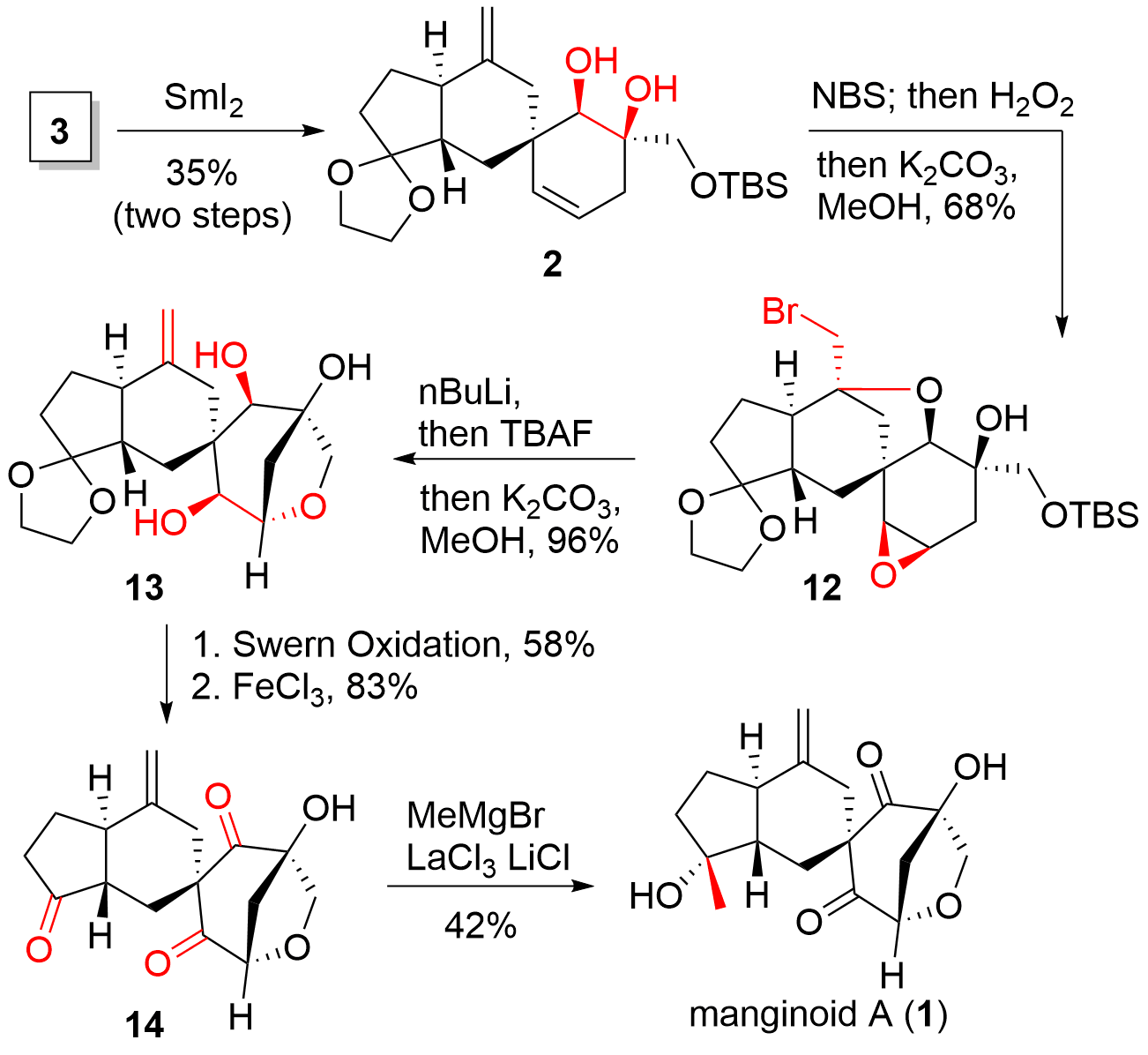 In total, the Snyder group was able to synthesize manginoid A (1) in 19 steps. Although the pinacol coupling was already described in 1859, it is often avoided in total synthesis because of the uncertain outcome and because of the harsh conditions used in many systems. Therefore, Snyder's total synthesis of manginoid A (1) is an encouraging example to explore synthetic pathways which are not automatically promising.